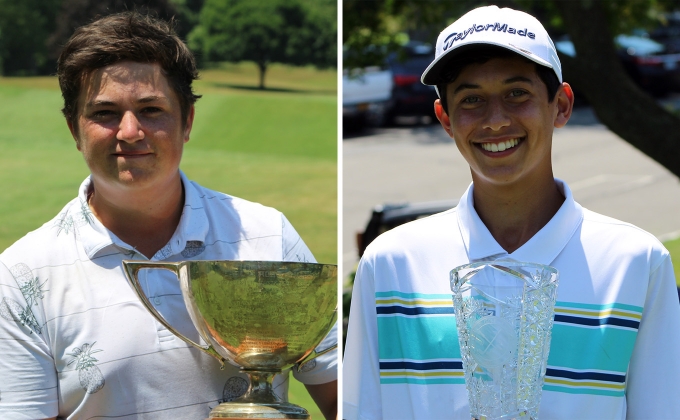 NORWALK, Conn. (July 6, 2020) -- For the first time in over 20 years, there’s a back-to-back champion at the Westchester Junior Championship after the 2020 season began Monday afternoon at Silvermine Golf Club.

With a strong finish featuring two birdies on his final three holes, Douglas Beney of Rye, N.Y.,  finished at 3-under 67 en route to his second consecutive Westchester Junior.

Harrison Browne of Westport, Conn., came away with the Boys Championship title, finishing at 7-over 77.

Beney, who plays out of Westchester Country Club, made the turn in 1-under 34 after a pair of birdies on Nos. 7 and 8. After an eagle to open the back nine, Beney bogeyed back-to-back holes before a making birdie on No. 16 to hold a one-shot lead.

On No. 17, runner-up Will Lodge of Darien, Conn., eagled to take a one-shot advantage over Beney with one hole to go. Beney responded on the final hole, posting his fourth birdie of the day while Lodge bogeyed to finish one shot shy of the champion

Michael Donnelly of Brewster, N.Y., and Henry Davaney of Bronxville, N.Y., finished in a tie for third.

In the Boys Championship, Browne earned the victory by two strokes after an impressive run on the back nine. After making the turn at 6-over 41, he opened the back nine with a birdie and completed the round at 7-over 77. Browne, who plays out of Rolling Hills Country Club, finished with five consecutive pars. He ended two strokes ahead of second-place finishers Will Huntington and Hudson Hagmann.

Most competitors in the field were also attempting to qualify for the 103rd Met Junior Championship Sponsored by MetLife, scheduled for July 13-15 at Rockaway River Country Club in Denville, N.J., and the 52nd MGA/MetLife Boys Championship, August 14-15 at Glen Ridge Country Club in Glen Ridge, N.J.