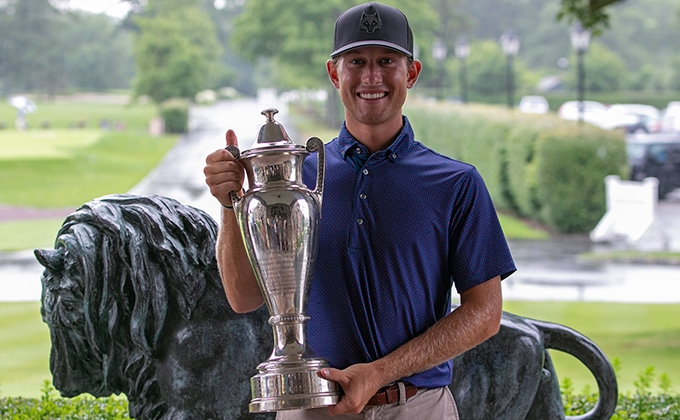 MAMARONECK, N.Y. (July 11, 2019) -- Steady play throughout the 36-hole championship match earned Christian Cavaliere of Mahopac an 8-and-6 victory and successful three-peat in the 100th Westchester Amateur Championship, Thursday at Winged Foot Golf Club. Two more titles were also handed out as Tom Yellin of Stanwich defended his title in the Senior Division and Bill Dober of Brooklawn claimed the crown in the Super Senior division.

Cavaliere's early consistency gathered him a 2-up lead after a pair of pars to open play, while Eric Terminello of Knollwood then settled in with a nice up-and-down for par on the par-three 3rd hole. Terminello then capitalized on the par-three 6th, knocking one to just a few feet to lead Cavaliere to a concession. However, that ended up as Terminello's final win of the morning 18, as Cavaliere piled on steady play with some successful birdie bids.

A birdie on the par-four 9th picked up momentum for Cavaliere, as he ended up winning seven of the final 10 holes in the morning to grab a commanding 8-up advantage. The 22-year-old rising senior at Boston College claimed the 10th with a par-four, then rolled in birdies on the par-five 12th and par-three 13th. With Terminello's game just off the mark, pars once again earned Cavaliere wins on Nos. 14, 16 and 17, where Cavaliere made an impressive up-and-down after facing a short-sided chip from well below the right of the challenging par-three green.

However, Terminello clawed back early on in the afternoon round, making birdie on the par-four opener and then producing his own steady play and winning pars on the following three holes to quickly trim the deficit in half to four. Terminello stuck another on the par-three 6th, earning a tap-in birdie to pull within three. However, Cavaliere remained focused on the task at hand and returned to more steady play on the ensuing holes.

"I kind of just knew I had to stay patient and keep making pars and hope that would be good enough," said Cavaliere, who became the first player to win the Westchester Amateur three years in a row since Winged Foot's Greg Rohlf from 1997-1999. "I tried to not get too ahead of myself or get concerned, so I just wanted to stay even-keeled and try to keep making pars, see what happened and it worked out."

Cavaliere quickly flipped things around once again by winning Nos. 7-9, all with par fours, and returning his lead to 6-up. A birdie-three on the 11th after a well-placed iron off the tee and approach to inside 10 feet pushed the lead to seven, while a par-five on the 12th closed out the match for an 8-and-6 final tally.

"It's always unbelievable coming here. It's always an honor," said Cavaliere of competing at Winged Foot for the championship. "The course is always in great shape and the greens are perfect, so it was really just a great week."

The week also had Cavaliere thinking ahead and hoping he has a shot of competing in another championship at the Club next year. "Everytime you drive through those gates it's a special feeling. There's a lot of history and so much has happened here, and I'm kind of thinking ahead to the U.S. Open next year," he said. "If I get the chance to play sectionals and make it through, that would just be a dream come true."

Meanwhile, Yellin used birdies on the par-five 4th and par-three 6th as he gathered a 3-up lead over Tore Carlson of Bedford Golf & Tennis through eight holes. While Carlson trimmed the lead in half with wins on Nos. 9-10, Yellin tallied wins on Nos. 11 and 14 before closing out the match by a 3-and-2 margin. Yellin, 66, was eligible to compete in the Super Senior division, but had the goal of repeating in the Senior division following his win in 2018 at Brooklawn.

Finally, Dober closed out an impressive run through the Super Senior division with a 6-and-5 win over 2018 U.S. Senior Amateur competitor Jim Hamburger of McCann. Dober, 77 and the 2003 Senior division winner in the Westchester Amateur, birdied the opener and kept it steady to build a 4-up lead through seven holes. While Hamburger won the 8th, Dober added wins on Nos. 9, 10, and 13, closing out the match, 6-and-5.