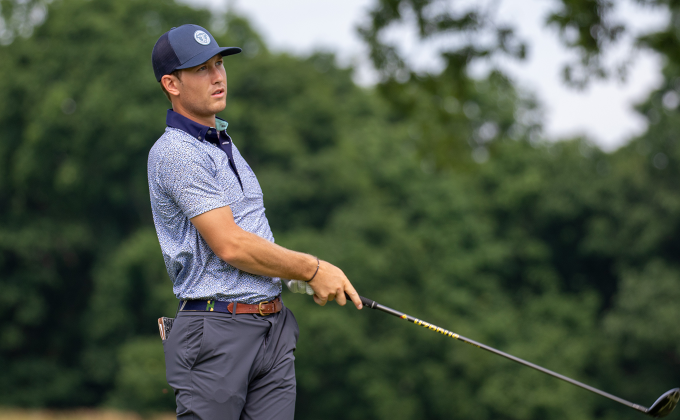 SCARBOROUGH, N.Y. (June 13, 2022) – Three-time Westchester Amateur champion Christian Cavaliere of Mahopac set the bar high in the opening round of the 100th Westchester Open Championship Presented by Poland Spring, firing a stellar 8-under 62 in his Monday morning round at Sleepy Hollow Country Club.

Cavaliere’s bogey-free round earned him a four-shot lead over the field, with the host club’s very own amateur Brad Tilley shooting 4-under 66. Nathan Han of Salem rounded out three amateurs in the top four with a 3-under 67, matching David Pastore of Golf Performance Center.

The 24-year-old Cavaliere took advantage of a calm morning and overnight rains at Sleepy Hollow that created ideal scoring conditions, getting off to a hot start with three birdies in his first four holes after starting on the par-3 10th.

“It was kind of a casual round,” said Cavaliere, who played alongside Han and James Allen of Scarsdale. “[There was] nothing crazy and nothing stood out. I didn’t make any mistakes. I missed one green, made up and down and gave myself good chances everywhere and a few fell. I made a couple putts of distance.”

With a 36 holes ahead, Cavaliere says he’ll set a couple goals for himself and see where that puts him at day’s end.

“It’ll be a change of mindset, but I’ll try to do my best to stay patient, stay focused and try to play against the course instead of playing against the field.”

For Cavaliere, recent months have been a return to golf after taking around six months off over the winter.

“Golf is not a career right now for me, it’s a hobby,” said Cavaliere. “It’s something I love to do, so I’m going to try to go into it with that attitude. This is a great spot and love being out here, I love competing, so I’ll just try to enjoy the day and enjoy every moment.”

After a trio of pars to start, Tilley reeled off three consecutive birdies and on his way to his own bogey-free round. He added his final birdie on the par-4 13th.

“Having a home game is obviously great,” said Tilley, the two-time reigning WGA Player of the Year. “Being comfortable on the greens and knowing the reads and some of the uphill-downhill shots play pretty tough if you don’t know how to adjust the differences, so a huge advantage there obviously.”

Han’s round also came without a bogey, with birdies coming on Nos. 1, 16 and 17 on the day. The 21-year-old is coming off a strong season at Columbia, where he earned Ivy League Men’s Golf Player of the Year.

Pastore, who took home the top payout in the 2018 Westchester Open when amateur Cameron Young won the title, had six birdies on the day but added in three bogeys. The 30-year-old has been competing on mini tours plus the PGA Tour Latinoamerica as of late, but made it a priority to come back to compete this week.

“I kind of had to do some crazy travel to do here for the tournament and being at Sleepy Hollow is definitely part of the incentive to do that,” said Pastore.

With 36 holes ahead, Pastore knows just what to expect.

“I’m happy that I’m in position and tomorrow is kind of just a long day,” said Pastore. “It’s kind of a marathon tomorrow to kind of stick around, especially on a course like this  where anything can happen, I’ll just try to put myself in position.”

Following Monday's round, a cut was made to the top 40 and ties, with 42 advancing behind scores of 2-over 72 or better.

A host of players sit well within striking distance heading into the final day, including another host club member Eamonn O’Brien, a trio of past champions in Greg Bisconti (2-under 68) of The Saint Andrew’s Golf Club, Frank Bensel of Century and John Stoltz of Concord Resort who all shot 1-under 69, as well as recent PGA Championship competitors Alex Beach (1-under 69) of Westchester, Casey Pyne (even-par 70) of Stanwich and Dylan Newman (even-par 70) of Brae Burn.

The second round begins at 7:30 a.m., Tuesday, with Cavaliere and Tilley teeing off at 9:00 a.m. off the 10th tee. Players will swap starting tees in the final round in the afternoon.