Cavaliere, Terminello to Square off in Westchester Am Final 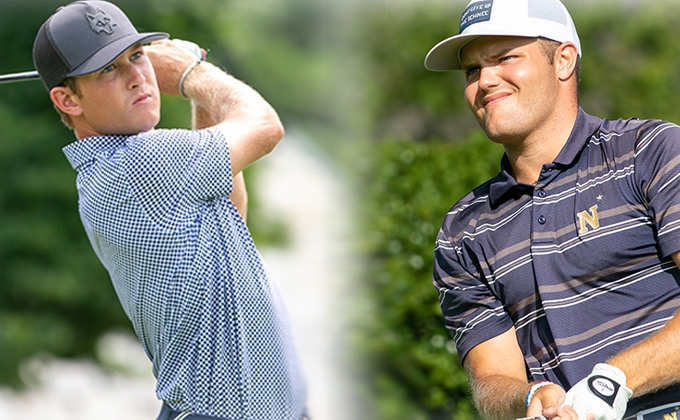 Cavaliere, Terminello to Square off in Westchester Am Final

Despite carding five double bogeys in his quarterfinal match, the 21-year-old Cavaliere also tallied five birdies to grind out a 2-and-1 victory over Matthew Camel of Round Hill. Similar to Tuesday's first day of play, Cavaliere settled in during the afternoon, carding an impressive seven birdies en route to a 4-and-2 win over James McHugh of Rye. The match featured impressive play from the start as McHugh secured back-to-back birdies out of the gate. But, Cavaliere responded on the par-three 3rd hole with a birdie of his own, before winning Nos. 5-7 to take a 2-up advantage. Though McHugh trimmed the deficit back to one, Cavaliere's three-consecutive birdies on Nos. 12-14 led to a 4-up advantage with four holes to play. McHugh forced the match to the 16th hole with a birdie, but yet another circle for Cavaliere's scorecard led to the 4-and-2 victory.

"It would mean a lot," said Cavaliere on Tuesday about the possibility of winning his third straight Westchester Amateur title. "It's always been a fun event. It's one of my favorites of the year, especially on an unbelievable course like this. It'd be an honor to win."

Meanwhile, Terminello fought through a pair of challenging matches on Wednesday to earn his spot in the final. The 22-year-old never led in regulation during his quarterfinal match against Justin Lane of Woodstock. He overcame a three-hole deficit claiming victory in 19 holes. He also fought back in his afternoon semifinal after trailing Nick Dilio of The Links at Union Vale by two through 10 holes. A par-birdie sequence on Nos. 11-12 quickly earned Terminello a 1-up advantage. After tying the challenging par-three 13th with pars, Terminello knocked his approach within inches from the right rough on the par-four 14th. A par-four on the following hole earned him a 2-hole advantage, while a bogey secured the match after Dilio found trouble left off the tee on the 16th.

The 36-hole match begins at 7:30 a.m. The pair faced one another in last year's Round of 16 in the Westchester Amateur, with Cavaliere securing a 3-and-2 win on his way to his second title.

In the Senior division, Tom Yellin of Stanwich is aiming to claim the title for the second straight year. Though Yellin is 66 and could have competed in the Super Senior division, he had already set his mind last year that he would try to repeat in the Senior division. He defeated Patrick Pierson of Hollow Brook by a 4-and-2 margin Wednesday and will face Tore Carlson of Bedford in Thursday's final. Carlson defeated Paul Fitzsimmons of Brooklawn, 3-and-2 to earn his spot in the final.

In the Super Senior division, Jim Hamburger of McCann defeated three-time champion Shawn McLoughlin of Ridgewood (Conn.), 5-and-4, while Bill Dober of Brooklawn played steadily to earn a 6-and-4 win over Tom Maloney of Mahopac. Dober claimed the highlight shot of the day, acing the par-three 3rd hole with a 9-iron.

Super Senior and Senior championship matches are scheduled for 11:50 a.m. and 12:00 p.m., respectively.