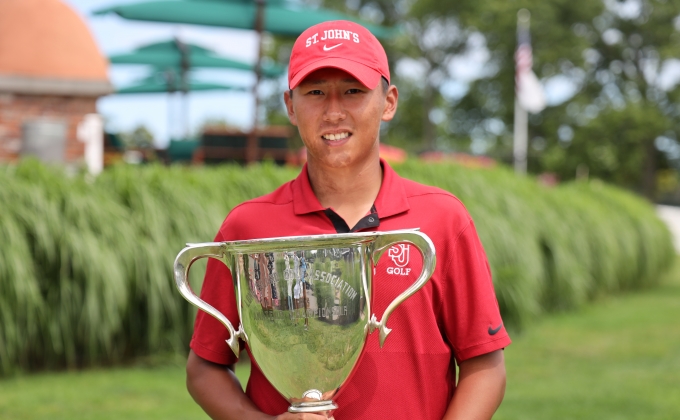 Chen had a slow start that included a double-bogey on hole five. The following hole, the par-5 sixth, Chen chipped in for eagle and changed the momentum of the match.

“Making an eagle in the morning, I was able to make about a 20-foot chip,” Chen explained. “That gave me a lot of confidence going forward and allowed me to settle in for the rest of the holes.”

He went on to go 4 up through 8 holes in the morning. O’Hara and Chen continued to play a close match until Chen birdied 15, putting him five up with three to play in the first 18. Chen had not played the 17th and 18th holes in a couple days due to his previous matches ending early.

“In the morning I played really well, except I haven’t played 17 and 18 in five rounds, so I had no idea what to expect and I got caught in some trouble," Chen said. "I tried to play as well as I could, and I tried to keep that mentality going into the next 18”.

The morning session ended with Chen holding a 3-up lead. His mindset going into the afternoon paid off against O’Hara, who he last played against in a 2019 Met Junior PGA event at the Glen Oaks Club.

“We both know we are really good golfers, we have a great relationship, and coming into today we were really looking forward to this event," Chen said.

O’Hara won the first two holes on the second 18, closing the gap on Chen. However, Chen would bounce back, making birdie on hole four and eagle on hole six to regain his lead of 3-up through 24. He continued to play steady throughout the afternoon and went 5-up after making back-to-back birdies on holes 8 and 9. on Hole 8 and Hole 9. Chen made birdie on 13 to win the match 7 & 5 over O'Hara.

“I tried to play steady, play my own game, and not think about the result,” Chen said. “It is an honor to play at this event. It was such a great event with great conditions. It feels good when this is my first time playing this event and getting this trophy with my name on it.”

Chen hopes to bring his great play and confidence into next week where he will compete at the 67th Ike MGA Stroke Play Championship on June 27-28 at Batusrol Golf Club.