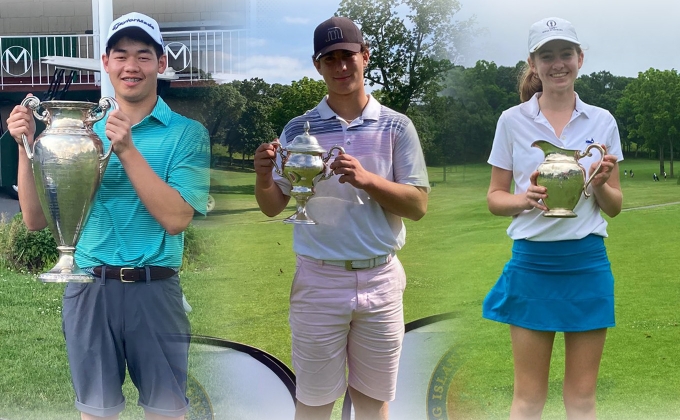 SMITHTOWN, N.Y. (June 21, 2021) -- Andrew Chen's stellar iron play propelled him to an even-par 72, granting the 16-year-old his first Long Island Junior Championship trophy at Smithtown Landing. Sean Shallat came away with the Boys Championship, shooting a 2-over-74 with two birdies, while Eliza Dana led the girls field to claim the Girls Championship with a 6-over 78.

Chen, a Whitestone, N.Y., native who plays out of Clearview Park in Bayside, edged out Colin McCullagh of Locust Valley, N.Y., by just one stroke to claim the Junior title. Chen played the course nearly to perfection by making par on every hole Nos. 4 and 16, where he made a birdie and bogey, respectively, to bring himself back even.

"Once I started finding the fairways, I was able to find the green every time," said Chen. "My irons were working. I was just striking them really well and putting my shots in the fairway."

Chen spoke on what he found difficult about the course and paid compliments to Smithtown Landing's course conditions.

"The par three's were definitely the most difficult for me. The greens are really small, so it's a really tight shot and it's easy to mess those up. The golf course was in great condition. It was a little windy so that kinda helped on some holes and hurt on others but the course was really nice. The greens were holding up and the fairways were rolling."

Hard work has paid off for Chen as he credited the improvement of his game over the last year on staying consistent in practicing his all-around-game.

"I've been practicing all year long. I've definitely gotten better with my irons which has set me up closer to the pin and helped me get more birdies."

Shallat shot a 2-over-74 to edge out Philip Connolly of Garden City, N.Y., by a comfortable three strokes. Shallat also tied for a third place finish in the Junior Championship, matching the score of reigning Junior and Boys champion Sam O'Hara along with Ethan Kalenderian of Locust Valley, N.Y..

"I was hitting my driver really well and was hitting most of the fairways," Shallat said. "From two to six I was hitting it pretty well but then I went OB on seven but got it back right after that and made a lot of pars."

Shallat, a Dix Hills resident, spoke on his preparation for the season and his emotions after winning the Boys title.

"I've been working on my putting a lot, mostly five feet and in for pars which I did a lot today," said Shallat. "I wasn't chipping very well but I was making a lot of par putts from inside 10 feet. I was just excited to win. This is my first time playing the Boys Championship and I won it so I thought that was pretty cool."

Eliza Dana of New York, N.Y., took home the Girls title with a runaway victory, shooting a 6-over 78 to outplay the field by seven strokes. Dana's round was highlighted by birdies on Nos. 5 and 17.