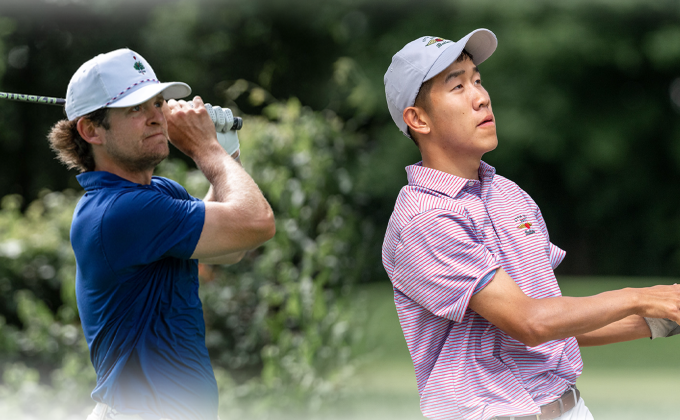 Coughlin, who qualified as the No. 17 seed, earned a 2-and-1 victory over Owen Walsh of Mahopac on Wednesday morning before getting off to a quick start and defeating Connor Belcastro of Sleepy Hollow, 3 and 2, in the afternoon.

After tying the opening hole, Coughlin won the next four to jump out to a commanding lead. Belcastro won the seventh hole, but Coughlin shut the door with wins on No. 8, 10 and 12.

“I’ve been qualifying for a lot of stuff and just kind of not showing up in events and doing one thing wrong every day," says Coughlin of his game as of late. "I know it’s been close and it seems to be clicking now, which is good timing … I’m making birdies that I wasn’t making a couple weeks ago.”

For Coughlin, the game's recently been more about enjoying friends' company and since beating his fellow Westchester Country Club member Doug Beney in the opening round, Beney's been on the bag for him.

“We’ve played a lot of golf together,” says Coughlin of Beney, a past WGA Junior champion. "He knows my game and it’s been a blast. I think doing this with friends now is the thing I enjoy the most about it.”

Gu, the No. 26 seed in the championship, ousted Westchester Public Links champion Erik Stauderman of Casperkill, 3 and 1, before eliminating an all-Westchester Country Club final with a 4-and-3 victory over Tobin Whitman.

“My game has been a little bit on the up-and-down lately,” said Gu about his game this summer. “When I played the Ike I just felt like I wasn’t really driving it well. I’m starting to drive it a little bit better now and I’ve just been working on other aspects of the game.”

Gu admits that Metropolis has been a fair test, and requires a lot of thinking if you miss the fairways and is now looking forward to being part of Thursday’s final.

“This will be my first final event, so I just want to enjoy the experience,” says Gu, acknowledging that he's seen many of his friends compete in similar finals and will now have experience of his own.

In the Senior Division, Ken Cohen of Villa Roma and Tore Carlson of Bedford Golf & Tennis will square off in Thursday’s championship match. Cohen, the No. 4 qualifier, defeated Sander Koudjis of Trump National Hudson Valley, 6 and 4, and Andre Bolukbas of Spook Rock, 2-up, in Tuesday’s opening rounds of action before defeating reigning champion Drew Greenland of Rockrimmon by a 6 and 5 margin on Wednesday. Meanwhile, Carlson qualified as the No. 10 seed and opened with wins over past champion (1991 WGA Amateur, 2018-2019 Senior Amateur) Tom Yellin of Stanwich, 2-and-1, and No. 2 seed Patrick Pierson of New York Country Club, 3-and-2. He held off 2015 winner Richard Feldman of Golf Performance Center, 1-up, in his semifinal match.

Metropolis’ own Rick Blank will aim to defend his title and claim the Super Senior Division crown for the third time in his career, having edged Tom Fox of Apawamis in 19 holes Tuesday and Robert Moriarty of Country Club of Fairfield by a 6-and-4 margin on Wednesday. He’ll square off against Jeff Reissman of Hollow Brook, who defeated Steven Hastings of Powelton, 2-up, and Barry Winter of Southern Dutchess, 2-and-1, on his path to the final.