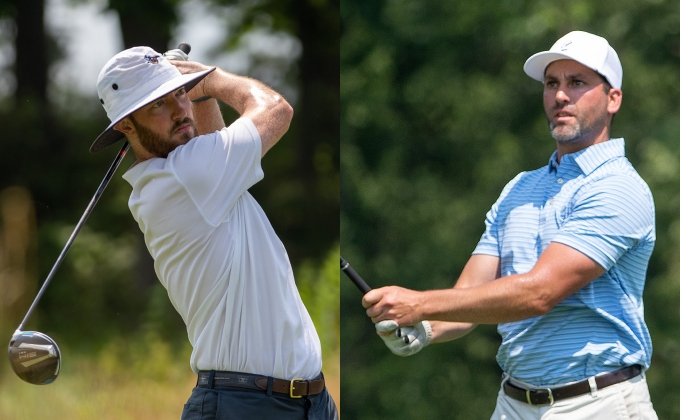 NEW CITY, N.Y. (July 7, 2021) – Flipping the competitive switch has proved to be no difficulty for both Luke Feehan of Mahopac and Chris Scialo of Paramount, who both earned a trip to Thursday’s Westchester Amateur Championship final after two more match play victories on Wednesday.

Feehan, the 2015 Westchester Amateur champion, has jumped back into the action following a couple years away from the competitive game while Scialo—a former professional—is making the most of the opportunity to claim a historic title at his home club.

After becoming reacquainted with the course in yesterday’s rounds, Feehan, 30, felt more loose on the course on Wednesday, defeating 14-year-old Lucas Rizo-Patron of Pelham, 2-up, in the morning and holding off 18-year-old Charlie Berridge of Wykagyl, 3-and-2, in the afternoon.

“I fortunately got something going and then kind of kept that riding, opening with two birdies in the first two holes of this match just to give me a little bit of a cushion,” said Feehan.

Feehan credited his success to giving himself more opportunities and limiting mistakes, hoping that he’ll continue his momentum on Thursday in the final.

“I love match play,” said Feehan. “I love being in the mix—I love being able to be aggressive in match play. It just frees you up and fortunately I’ve had success when that happens. I’ve been scrambling the last few days to get some form, but once you get started, you feel like you have something to work with.”

Meanwhile, Scialo has used his home-course knowledge to spark his run to the final.

“I’m very familiar with it and I’m comfortable out here,” said the 33-year-old Scialo, who has been a Paramount member for more than 20 years. “There’s a lot of very tricky holes and greens to say the least, so kind of knowing where to go is a major advantage at a place like this.”

Scialo’s experience around the A.W. Tillinghast layout has seemingly given him an edge, having notched wins by margins of 6-and-4, 4-and-3 and 6-and-5 following a slim 1-up win in the Round of 32. On Wednesday, Scialo defeated Brian Williams of Winged Foot and Dan O’Callaghan of Bedford.

Scialo played professionally for several years after competing collegiately at Towson but regained his amateur status several years ago and has played in a limited number of events.

“I’ve played in one or two things, and just don’t really have the time,” says Scialo of his recent competitive experience. “But, it’s fun. The competition is great. It’s still fun to play and see how you stack up against a lot of the other guys in the area, so I’m having a great time.”

Two scorching days have certainly taken their toll on the players and 36 holes await, beginning at 7:00 a.m., Thursday.

Two more titles will be handed out Thursday in the Senior and Super Senior Divisions. Jim Romaniello of Shorehaven will aim to secure the Senior title for a third time and will square off against Drew Greenland of Rockrimmon at 7:20 a.m. Romaniello upended Andre Bolukbas of Spook Rock, 2-and-1, while Greenland held off Dana Pike of Apawamis in 21 holes.

In the Super Senior Division, Rick Blank of Metropolis is seeking his second title in the division and will face Country Club of Fairfield’s Roger Tarika at 7:30 a.m.

Paramount is hosting the Westchester Amateur Championship and Senior and Super Senior Amateurs for the first time in its history. The course has proved challenging yet fair for the field, with the course staff keeping outstanding conditions amidst hot temperatures and Tuesday evening’s heavy thunderstorms that blew through.