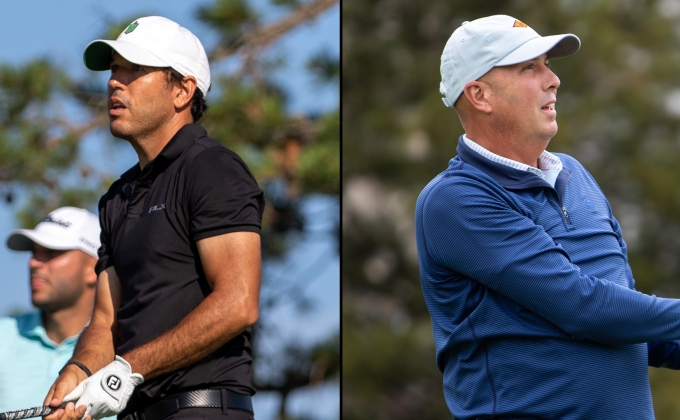 ELMSFORD, N.Y. (December 7, 2021) - After phenomenal seasons on the course, Darin Goldstein of Deepdale and Dave Scialabba of Meadow Brook have been named the Long Island Golf Association’s Player of the Year and Senior Player of the Year, respectively, for the 2021 season. Both Goldstein and Scialabba have now won the awards in back-to-back seasons.

Goldstein had an eventful year in 2021, playing in 12 events over the course of the season. In May, he had a strong showing at Wheatley Hills, finishing as a quarterfinalist in the Richardson Memorial. Consistent play earned him top 10 finishes in several other tournaments, including a second place finish at the Bergen County Amateur, a third place finish at the NYSGA Mid-Amateur and a tie for fourth at the LIGA Mid-Amateur.

He played some of his best golf at the LIGA’s two biggest championships of the 2021 season, the Long Island Open Championship Presented by Stifel at Fresh Meadow and the Long Island Amateur Championship Presented by Sterling National Bank at Noyac. At Fresh Meadow, his late charge during the final round put him right in the mix. He birdied holes 16, 17 and 18 to tie the lead and earn a spot in a three-hole aggregate playoff for the championship. He fell just short, losing to Andrew Svoboda of Engineers in a three-hole playoff, but finished runner-up and low amateur for the championship.

At Noyac, Goldstein started hot, shooting 4-under in stroke-play qualifying to earn the No. 2 seed for match play. He won his first four matches by margins of 3 and 1, 6 and 4, 5 and 4, and 2-up, respectively, to reach the championship match. He battled hard in the 36-hole final against Tyler Gerbavsists of Huntington Crescent, but ultimately came up short, losing the match 1 down and finishing runner-up in back-to-back LIGA major championships.

Scialabba's play over the past two seasons has been the model of consistency among senior amateur players on Long Island. This year, Scialabba competed in 14 events, recording seven top-10 finishes and two victories on his way to a second consecutive Senior Player of the Year award.

Scialabba’s signature moments in 2021 came during his two wins. In May, he cruised through match play at the 70th Havemeyer Invitational at Southward Ho and won the event in style, closing out Tom Trakoval by a 6-and-5 margin to claim the Senior Division crown.