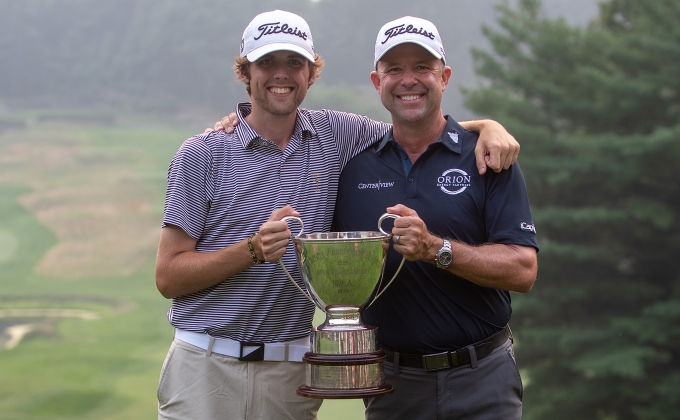 BEDFORD HILLS, N.Y. (July 20, 2021) – It was a successful repeat of sorts for Rob Labritz, Tuesday, as the GlenArbor Director of Golf won his second consecutive Westchester Open Championship at his home club, backing up his 2016 win with an impressive four-shot victory.

Labritz did much of the heavy lifting in Monday’s opening round when he fired an 8-under 63 to take a three-shot lead into Tuesday’s final two rounds.

“I prepped myself and kind of got ready to visualize and see myself playing well and it came to fruition,” said Labritz, who shot 2-under 69 in Tuesday morning’s second round to take a commanding five-shot lead over amateur Max Buckley of Westchester into the afternoon.

Finding he had a three-shot lead over the already finished Brad Tilley of Sleepy Hollow after his birdie, Labritz tacked on one more for good measure on the par-5 15th, getting up and down from a front greenside bunker. He cruised in with three consecutive pars to secure the win.

‘I’m just out there hitting one golf shot at a time,” said Labritz, who also won Massachusetts Open on top of competing in the PGA Championship this year. “I don’t really feel pressure and I love playing the game of golf, so to be able to hit quality shots in front of my home crowd made it worthwhile.”

While Labritz reported that he hit the ball solid all week, he thought his mental game was key as well.

“I didn’t get too high or too low on any shot I hit,” said the 50-year-old. “I just kind of went out there and did my job and hit fairways and hit greens. I just stayed in the moment and I think that’s all I have, just to be able to stay in the moment, not to get too far in front of me or too far behind me, I’ve worked hard over the last few years to do that.”

Labritz treasured having a number of members coming out to show their support and having his son Matthias on the bag as well.

“We’re four-for-four,” said Labritz, also including a pre-qualifier for the Travelers Championship as a victory with his son on the bag this year. “To have my boy on the bag means everything to me.”

Tilley locked up low amateur honors with impressive scores of 67-68 on Tuesday, finishing at 7-under to also notch solo second place.

Mike Ballo, Jr., of Westchester fired the low score over the final two rounds behind a pair of 67s, locking up solo third at 6-under over 54 holes.

Jackson Fretty of Greenwich shot 5-under 66 in the final round to shoot up the leaderboard and tie fourth with Timothy Hegarty of Sleepy Hollow at 5-under for the championship.

GlenArbor, a Gary Player design, was hosting its third Westchester Open Championship since 2007 and proved as an outstanding test for the region’s top amateurs and professionals.