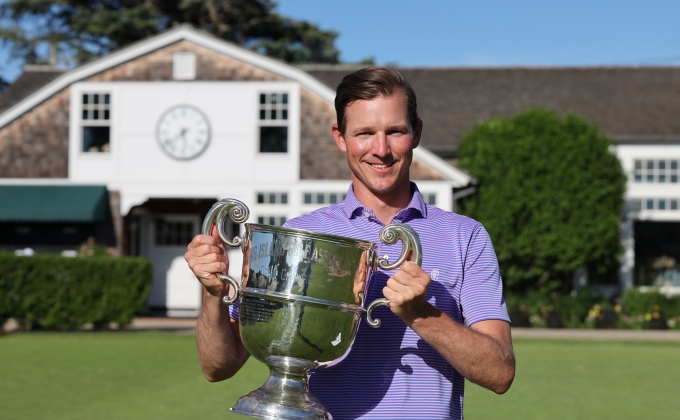 WESTHAMPTON BEACH, N.Y. (June 9, 2022) – Reid Howey of Piping Rock Club won the 98th Long Island Open Championship Presented by Stifel Thursday after carding a 2-under 68 in the final round. Howey sat at even par entering Thursday’s final round. With tough winds and a morning weather delay, Howey played steady golf down the stretch and finished the 54-hole event at an impressive 2-under par.

After the delay in the morning, Howey got off to a great start, making birdies on holes two and five. With the golf course playing firm and fast, Howey came into the day with the mentality that even par would be a great score.

“I didn’t try to overpower the course… my goal was to keep the ball below the hole, play the angles, and take my medicine when I got in any kind of trouble,” Howey explained.

The championship was all but won on the back nine. After hitting his tee shot out of bounds on hole 10, Howey bounced back in a big way, getting up and down from the fairway for bogey. He then rattled off back-to-back birdies on Nos. 14 and 15, putting him at 2-under for the championship.

“Yeah, fourteen I made a really good four there… and on fifteen I was just playing to the middle of the green, trying to make my life easy,” Howey said. “I was playing left of the hole in the hopes of avoiding the big mistake, and I was able to roll in a nice fifteen footer there to give myself more of a cushion coming down the stretch.”

This was Reid Howey’s first appearance in the Long Island Open Championship. He attributed some of his success this week to tournament experience he had in 2021.

“Last year I was fortunate to be in the final group at the New York State Open with Danny Balin and Andrew Svoboda, both guys who have had a ton of success in this section. Drawing on that allowed me to come into today’s round more even keel and be prepared to play steady, patient golf,” Howey explained.

Behind Howey was Mark Brown of Tam O-Shanter Club, who made three birdies on the back nine and finished the tournament at 1-over par. Finishing in a tie for second with Brown was Connor Costello of Garden City Golf Club.

Howey, Brown, and Costello separated themselves from the rest of the field, with defending champion Andrew Svoboda of Engineers Country Club and Clancy Waugh of Westhampton Country Club both finishing the event at 3-over par. Daniel Abbondandolo of Brookville Country Club earned low-amateur honours, finishing the championship with a score of 5-over 215.