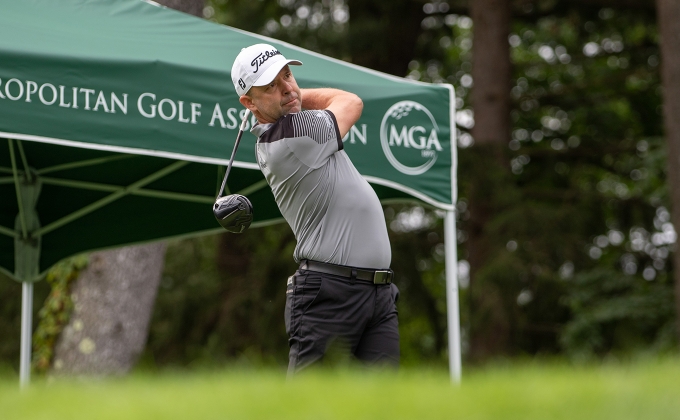 BEDFORD HILLS, N.Y. (July 19, 2021) – Rob Labritz put his home course knowledge to good use on Monday, firing an impressive 8-under 63 at GlenArbor to capture a two-stroke lead in the 99th Westchester Open Championship. Labritz, GlenArbor’s Director of Golf, is aiming to defend home turf once again, having won this championship in 2016 at GlenArbor.

“I’m just focused on the one shot that I have and that's what I do,” said Labritz, who won the Massachusetts Open earlier this year and also competed in the PGA Championship at Kiawah Island. “That's all I can do. I've worked really hard on just doing that to not get you know, too excited or too down or whatever. Just one at a time.”

Labritz made the turn during his morning round in 3-under 33, but really caught fire beginning on the par-3 11th. From there, Labritz birdied Nos. 11-14 before capping off a 6-under run over five holes with an eagle on the par-5 15th. He added a bogey on the next for his 8-under tally.

Labritz also felt a key was having his son, Matthias, on the bag.

“We just have fun,” he said. “You see, we laugh out there. He keeps me loose and I just enjoy every second out there with him.”

It also meant a lot to have a number of members following his play.

“It was just so great to have our members out, you know, kind of just to follow me around, kind of lift me up a little bit. To represent them at the best of my ability… that’s what it’s all about.”

Meanwhile, Cian Curley of Silo Ridge Field Club turned in a low round morning as well, firing 6-under 65. He was hot out of the gate with three birdies over his opening four holes. Curley tallied just one bogey and scattered four more birdies in his round.

A quartet of players carded 3-under 68s to sit within striking distance entering Tuesday’s final 36 holes of play. Dylan Newman of Brae Burn and Peter Kampmann of Manhattan Woods posted theirs in the morning, while Westchester’s Alex Beach and amateur Max Buckley did so in the afternoon.

Reigning champion Paul Pastore of Fairview, as well as 2000 champion Carl Alexander of Purchase and Mike Diffley of Pelham shot 2-under 69 on the day.

Following the conclusion of round one, a cut was made to the low 40 scores and ties, with 42 players making the cut at scores of 2-over 73 or better. The second round will tee off at 8:00 a.m., Tuesday morning, with the third and final round taking place in the afternoon. Labritz and Curley will tee off at 9:40 a.m. as the final pairing in round two.

GlenArbor, a Gary Player design, is hosting its third Westchester Open Championship. The layout sweeps across the rolling terrain of Bedford Hills and places a premium on accuracy off the tee and a soft touch around the greens.