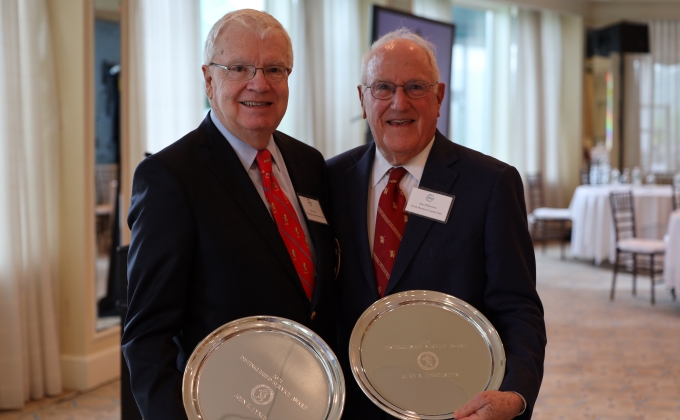 During the morning program, LIGA President David Mattana welcomed the attendees to his home club and reported on recent activities of the LIGA. Michael Sullivan, President of the Long Island Caddie Scholarship Fund, shared on update on the Fund, which is celebrating its 60th anniversary in 2022.

The LIGA presented its Distinguished Service Award to two individuals who have been longtime supporters of the LIGA and have been dedicated to serving the game on Long Island for a number of years. The two awards were presented to John Lynch of St. George’s and Alan Finkelstein of Fresh Meadow. Both Lynch and Finkelstein are past presidents of the LIGA and remain active volunteer leaders.

As part of the educational program, Jay Herman of Herman, Katz, Cangemi, Wilkes & Clyne, LLP, and Jeff Dugas of Wellspeak, Dugas & Kane, shared their expertise with the group and discussed the current state of the Private and Public golf markets. Herman and Dugas also covered property tax cases of interest at the trial and appellate levels.

A highlight of the day was the debut of the LIGA's centennial video, which captured the rich history of the game on Long Island for more than 100 years and focused on the great players and names who have made their mark on Long Island golf.

Special guest and Long Island native John Feinstein provided an entertaining discussion on Long Island Golf and shared other stories from his travels around the golf world. Feinstein is a noted American sportswriter and author of 42 books, 23 of them New York times bestsellers.