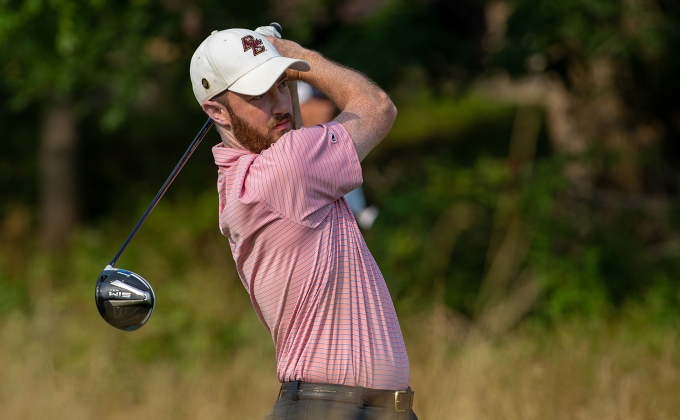 NEW CITY, N.Y. (July 6, 2021) – Following day one at the 102nd Westchester Amateur Championship, five matches are still to be decided as evening thunderstorms halted play at 5:36 p.m., and continued to cycle through the area. Matches will resume at 7:00 a.m., with Super Senior and Senior Division matches beginning at 8:00 a.m.

A trio of players earned their spots before the horn blew, including 2015 WGA Amateur champion Luke Feehan of Mahopac.

“Today was just holding on,” said Feehan following his 1-up and 2-and-1 victories. “This course is ready to host a serious championship. It’s cool for them to have us and it’s just impeccable conditioning.”

After taking a bit of a competitive break from golf, Feehan “felt the itch” to get back in the mix this season before welcoming a baby girl in September.

“When you’re out of it for a few years, there are definitely a couple more butterflies just because there’s competitive rust and these guys are pretty good,” says Feehan, who will play the winner between Jud Langille of Trump National – Westchester and Lucas Rizo-Patron of Pelham. “It’s just nice to be able to get back to some form that can maybe give it a run.”

For Feehan, the early success sparks memories from the past and he’s hoping it can be more of the same as the week rolls on. “I’ve loved this event for many years and it’s just kind of a momentum event,” he said. “Once you get started if you find a little something, you can hopefully just ride it. I’m hoping to rekindle some form of glory and we’ll see how it goes tomorrow.”

Charlie Berridge of Wykagyl won both his matches by 3-and-1 margins, defeating Pelham’s Stephen Dolan and David Larado. Jonathan Renza of Hudson National rounds out those in the championship bracket securing their spot. Renza won his morning match 1-up over Stephen Weider of Knollwood before ousting Owen Walsh of Mahopac, 3-and-1.

MGA eClub – Connecticut member Jack Woods and Brian Williams of Winged Foot have the most holes remaining, currently sitting on the eighth hole, after both competitors earned 19-hole wins in the Round of 32.

James Allen of Scarsdale won his morning match 7-and-6 and currently owns a 4-up advantage over Jordan Klein of GlenArbor as he eyes a spot in the quarterfinal round.

Dan O’Callaghan holds the advantage (1-up through 16) against Chris Calabro of Knollwood and Chris Scialo of Paramount leads Winged Foot’s Conor McDade through 11 holes.

In the Senior Division, the door is open for a new champion after two-time defending champion (2018-2019 ) Tom Yellin of Stanwich was defeated by Gustav Talleur of Beekman, 2-and-1. However, Andre Bolukbas of Spook Rock ended Talleur’s run with a 2-up victory in the afternoon.

Jim Romaniello of Shorehaven notched 6-and-4 and 1-up victories en route to the semifinals, while Drew Greenland of Rockrimmon used an afternoon 4-and-3 victory to secure his spot in Wednesday’s action. Dana Pike of Apawamis logged 2-and-1 and 1-up wins on the day to round out the four competitors remaining.

Super Senior reigning champion Bill Dober of Brooklawn was also defeated, with Scotty George winning 1-up. Roger Tarika of Country Club of Fairfield rolled into the semifinals behind a 6-and-5 victory. Meanwhile, Robert Moriarty of Country Club of Fairfield and Rick Blank of Metropolis earned 2-and-1 and 3-and-2 wins, respectively, to emerge from the lower portion of the bracket.