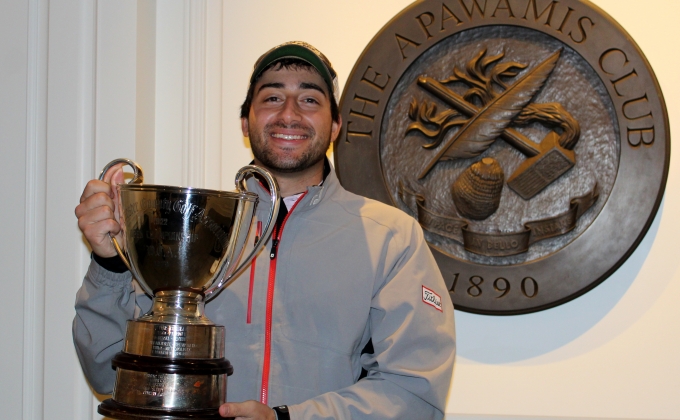 Rye, N.Y. (October 13, 2020) - Fairview's Paul Pastore fired a 6-under 66 at The Apawamis Club to capture the 98th Westchester Open Championship. Pastore, 24, won his first WGA title by three shots thanks to a round that included six birdies and an eagle.

The 98th playing of the Westchester Open was originally shortened to 36 holes as it was postponed to the fall, allowing for less daylight. With Monday's rain, the championship was further shortened to 18 holes. Competitors played through a rainy morning at Apwamis and play was suspended for about one hour in the early afternoon.

Pastore started his round on 10, which he birdied right out of the gate. "I started on the 10th hole, a par five, and made a nice birdie there. I birdied the 12th hole, and then we stopped for the rain right after that. "We stopped for a little bit and I just tried to stay loose, drink some water, and then we went back out," said Pastore. "I made a couple of pars and then birdied the par-3 16th, birdied 17 and made a bad bogey on 18. I hit an iron off the tee and really should have hit driver because I was hitting the driver well all day," he shared post round.

Pastore kept his momentum going after making the turn with another birdie on No. 1, his 10th hole. On the the par-4 third, he nearly aced the hole but he was just a few inches from the hole, and the tap-in eagle propelled him to the top of the leaderboard. I figured from the front tee I would hit three wood, so I picked my line, I picked a good line and I walked up there and it was right there, so that was pretty cool, a nice tap in eagle," he said.

He stayed consistent throughout the rest of the round; although he had a bogey on no. 8, he finished with one more birdie on 9 to earn the title.

Paul's older brother David won the Westchester Open in 2014 at Metropolis, as an amateur. David also competed at Apawamis and finished with a 2-over 74, but was on site to celebrate the win with Paul.

"It's huge," Paul said of this win.  Growing up my brother was always winning everything and I kind of took the back seat there, I always played a lot but not as well [as David]. "The past few years I’ve been working at Fairview under Shaun Powers who is the head pro, we’ve been working on my game and it’s nice to have improvement every year, that’s what I’m looking for."

Both Pastores have now won a championship at Apwamis - in 2006 David became the youngest winner of the Met Junior, which took place at Apawamis that year. "Apawamis has been good to us," Paul said.

Finishing three shots back was Brandon Holden of Apawamis with a 3-under 69. Holden carded a birdie on his final hole, No. 9., to come in one shot ahead of four players at 2-under. The defending champion Frank Bensel of Century, Chris Gabriele of Sleepy Hollow, Josh Goldenberg of Fenway, and Alex Beach of Westchester all finished with scores of 2-under 70.

Max Buckley (a/r) of Westchester and Apawamis head professional James Ondo finished with scores of 1-under 71. Nathan Han of St. Andrew's earned Low Amateur honors after he finished his round at even par.