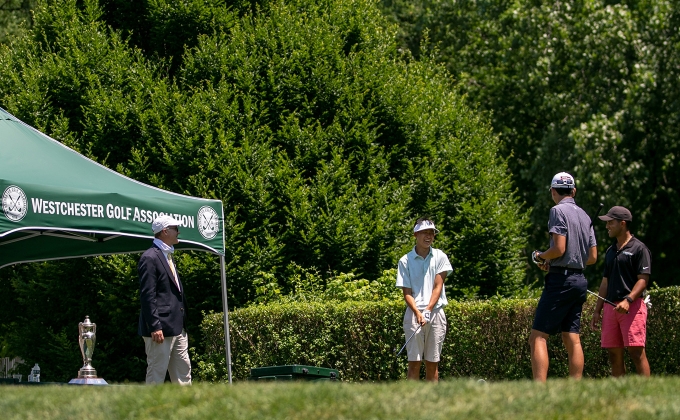 ELMSFORD, N.Y. (July 6, 2020) -- On-site stroke play qualifying for the 101st Westchester Amateur Championship finished just as darkness began to fall on Monday, as late-afternoon thundershowers in the area led to a 2-hour, 20-minute suspension of play. Thirteen seeds for match play are set, while a 5-for-3 playoff will determine the final positions. The playoff will begin at 7:15 a.m., with the majority of match times are yet to be decided.

Chris Calabro of Mahopac didn't let the suspension bother him, as the former Knollwood member rolled in five birdies on the way in en route to a 5-under 66 and medalist honors. Justin Lane of Woodstock took the No. 3 seed outright thanks to his 2-under 69 and will make his second straight match play appearance in the championship, as will former champion Brad Tilley of Sleepy Hollow (-1/70).

Meanwhile, James McHugh of GlenArbor posted even-par 71, allowing him to advance to match play for the fifth consecutive year in the championship.

Brian Flanagan of Rye Golf Club carded a hole-in-one on the par-three 16th hole, with the ace helping him shoot 2-over 73 and snag a spot in the morning playoff.

Chris Calabro, Mahopac | -5/66, #2 seed
"[The suspension of play] didn't affect it too much. I had a good pairing today and was just able to keep my head in it. This is a course I know very well. It's near and dear to me and I was just able to play well."

Justin Lane, Woodstock | -2/69, #3 seed
​"It was great to finally have something to play for other than just a match at home. The course was great. It plays great and it's going to be a great match play course. I'm excited for tomorrow."

William Parker, Winged Foot | -1/70, #7 seed
"I've been ready to go for a little bit now ... there were just some small mistakes here and there -- you get rusty not playing in events for too long ... I'm hoping to get those back on track."

Russell Giglio, Knollwood | E/71, #12 seed
"It was nice to try to just keep it a 'Monday off from work' and enjoy a round at the home course. Nerves creep in here and there but nobody's played tournament golf yet this year."