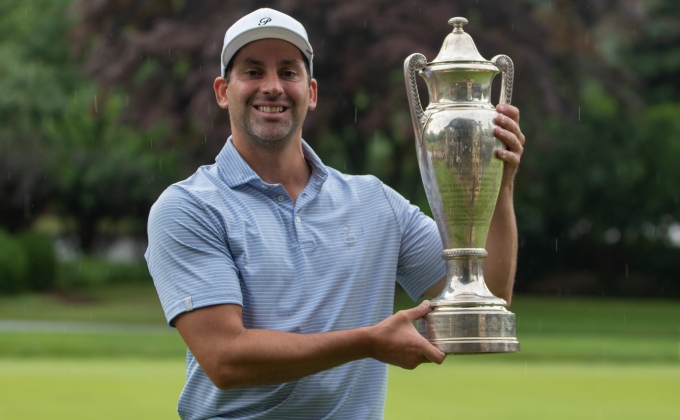 The third restart of play was the charm for Scialo, as the 33-year-old clinched the victory by draining an 18-footer for par on the par-4 third hole. Feehan had an opportunity to tie the hole, but his sliding downhill putt fell wide.

“I’ve played these my entire life growing up and I’ve never actually won one,” said Scialo, who regained his amateur status several years ago after competing professionally out of college. “So to come back out and keep playing is awesome, and for it to be on my home course is honestly even better—it’s kind of special.” Scialo grew up playing at Paramount, with his family having been members for more than 20 years.

Neither player could gain much momentum early in the 36-hole match, with only four holes being tied in the morning 18. Feehan held a 2-up lead through 10, but Scialo won five of the next eight holes to take a 2-up lead of his own into the second 18, which had a quick turnaround time due to impending weather.

“The entire tournament, from day one into today, it was just really hard to get momentum,” said Scialo of the challenges in battling his opponents and the weather. “It’s difficult. It’s tough to get momentum, but every hole in match play you have to concentrate.”

Scialo pushed his advantage to 3-up multiple times, but 2015 Westchester Amateur champion Feehan didn’t go down easily. Feehan won Nos. 13 and 14 with back-to-back birdies, while the first suspension of play then came after pars for the duo on the par-4 15th.

After an hour suspension, Feehan came out and made the most of the opportunity, making birdie on the par-4 16th to tie the match. After hitting approaches into the par-4 17th, lightning forced another suspension.

Once play resumed, Feehan made a 15-footer to save par, then both players made threes on the closing 18th hole to send the match to extras. Both made par on the par-4 first before play was suspended again.

They returned to play on the par-4 third hole. Though Scialo’s approach came up short in the greenside bunker, he hit his next behind the hole to set up the winning putt.

“I honestly hit it a little firmer than I would have liked, but I kind of watched it curl in and hit the back of the hole,” said Scialo. “It was a great par save for sure.”

Scialo credited his victory to those kind of par saves through the week. “I think keeping it together and having some of the big up and downs and clutch par saves really helped me to get here and then I had some of the same saves today,” he said.

Despite tasting victory, Scialo doesn’t anticipate competing in any more events this summer, but does have big plans ahead with his wedding and honeymoon coming up.

The championship bracket wasn’t the lone title that needed extra holes on Thursday. After 22 holes, Drew Greenland of Rockrimmon defeated Jim Romaniello of Shorehaven to win the Senior Amateur Division.

Greenland had an early lead, going 2-up through three holes. His consistent play allowed him to extend his lead to 4-up through 12 holes. “Early on, I was driving the ball well,” Greenland said. “I was hitting good approaches and had a good feel for putting.”

Romaniello began to chip away at the lead by winning Nos. 13-14. Greenland won No. 15 to return his lead to three, but that didn’t close the door for Romaniello.

“Even when I was up three, I thought I was going to win” Greenland said. “I'm not thinking I'm about to go bogey, bogey, double bogey, but I didn't take it for granted.”

Romaniello’s perseverance and determination allowed him to tie the match with wins on Nos. 17 and 18.

On the 19th hole—the par-4 first—it seemed the match was going to come to a close, but Greenland missed a four-footer. But on the 22nd hole—the par-3 third—Romaniello’s tee shot found the rough, while Greenland found the green and two-putted for victory.

“I got it back together,” Greenland said. “I had no defeatist attitude about blowing the lead. I was angry, I had blown the lead, but I was like let's go keep playing.”

In the Super Senior Division’s championship match, Rick Blank of Metropolis took on Roger Tarika of Country Club of Fairfield. While the match was tied through three holes, Blank won the next two holes and never looked back. Blank stretched his advantage to 4-up on the back after wins on Nos. 12-13, ultimately leading to his 3-and-2 victory and his second career win (2018) in the event.

“It feels great,” said Blank. “It becomes more special each time it happens, and hopefully we see what happens next year. There’s still a little fire in the furnace you might say.”

Blank managed the course well and was fueled by three birdies on the front nine to give him an early cushion.

“I mostly hit three wood off the tee to try to keep the ball in play because the course was not playing that long,” said Blank. “I tried to keep the ball below the hole and tried to get used to the greens here, which are very tough.”

Blank will look forward to next year’s tournament which will take place at his home course. “It'll certainly be an advantage to have played the course,” he said. “I played 20 times a year for the last five years, so I'll have some local knowledge.”