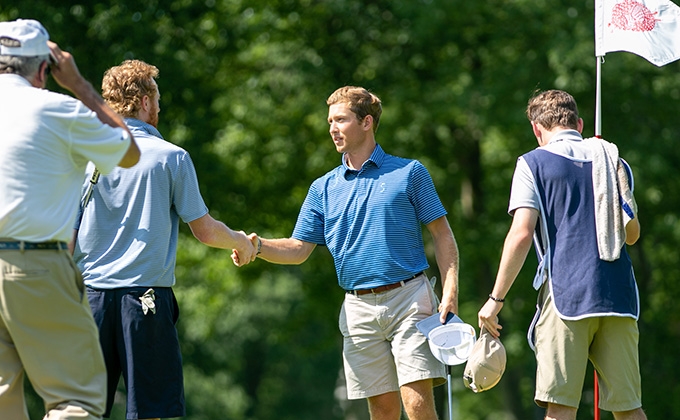 Cavaliere grinded to earn a 1-up victory over Matthew Ferrari of Metropolis in the morning before defeating Peter Jakaitis, 5-and-3, in the afternoon's Round of 16. Cavaliere, a rising senior at Boston College, will square off against Matthew Camel of Round Hill, who will head to Northwestern this fall. Camel endured a 19-hole match against MGA eClub - NYC member Matt Wheeler in the morning before taking a 3-and-2 win over R.J. Zielinski in the afternoon.

Christian Cavaliere is into the quarterfinals after defeating Peter Jakaitis in the Round of 16. He shared his thoughts on his play ⤵: https://t.co/B0lqCQ10aL pic.twitter.com/Cg5kMxpXlQ

Daniel Levin of Century picked up a pair of victories and will take on James McHugh of Rye in Wednesday morning's quarterfinal round. Justin Lane of Woodstock and Eric Terminello of Knollwood, in addition to Jason Blake of Otterkill and 2019 Westchester Public Links champion Nick Dilio of The Links at Union Vale round out those aiming to etch their name on the Paul Adler Trophy for the first time.

Senior division competitors also battled through two rounds of match play on Tuesday, with reigning champion Tom Yellin of Stanwich keeping his goal to repeat alive. Yellin will face Patrick Pierson of Hollow Brook in Wednesday's semifinal round, while Paul Fitzsimmons of Brooklawn and Tore Carlson of Bedford will vie for the other spot in Thursday's final.

Jim Hamburger of McCann, Shawn McLoughlin of Ridgewood (Conn.), Bill Dober of Brooklawn and Tom Maloney of Mahopac all earned victories in the Super Senior division and continue play in the semifinals on Wednesday morning.