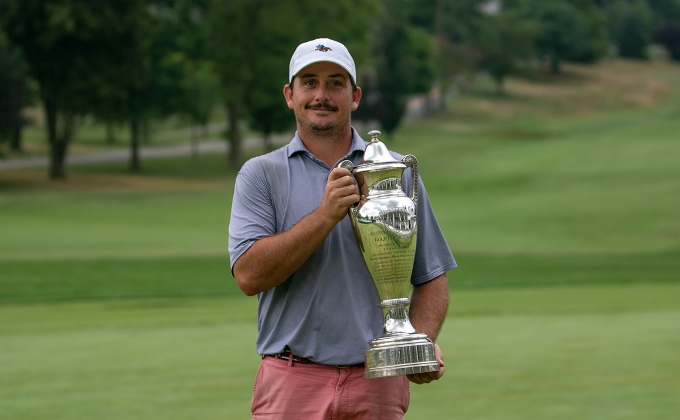 ELMSFORD, N.Y. (July 8, 2020) -- Fifteen years ago, Brad Tilley claimed the Westchester Amateur Championship as one of the area's rising stars. On Wednesday, the 37-year-old defeated a pair of up-and-coming talents not unlike himself in 2005, to hoist the Paul Adler Trophy once again.

Tilley and Lane were tied—both playing 2-over—through three holes, but Tilley quickly dialed in his game with birdies on Nos. 4 and 5 to go 2-up. A two-putt birdie on the par-5 ninth made his advantage three entering the final stretch.

"I just tried to play my game," said Tilley. "I created a game plan, I know the course decently well, and I stuck to that. I was playing well coming in and I just kind of kept it up."

After pars led to ties on Nos. 10 and 11, Tilley took advantage of three short, but demanding par fours at Knollwood by making a trio of consecutive birdies to close out the match.

"Those holes (Nos. 12-14) are really important for match play," said Tilley. "They're birdie holes, but you can also mess them up and the match can flip. So, I just tried to focus and play the best I could and keep my foot on the gas pedal. I was able to do that with three birdies to close it out, so it was fantastic play."

Tilley opened the day with a 2-and-1 victory over 19-year-old Nathan Han, who just completed his first year at Columbia. Runner-up Lane defeated three-time Westchester Amateur semifinalist James McHugh of GlenArbor in an exciting 20-hole match, with Lane advancing behind a par five on the ninth hole.

Though Tilley says he doesn't think much about the field and typically focuses on his own game, he has high respect for the young talent in the area and admits it keeps pushing him to improve his own game.

"There are a lot of great players. The youth movement in golf is great, especially in the Met Section," said Tilley. "These kids are just getting better every year, so I need to continue to get better myself. It's an honor to beat a field like this."

Coming off a strong fall in which he claimed the NYSGA, WGA and MGA Mid-Amateur championships as well as the Sarazen Invitational, Tilley continued to work on his game during the winter and through the spring. His garage transformed into a lab for his game, featuring a launch monitor, putting space and a gym. It's safe to say he's seen its impact already after a strong start to the delayed 2020 season.

"It's huge to get a win in any year," Tilley said. "I had a nice showing at the Connecticut Amateur as medalist and a semifinalist and to come here and get a win means the world to me. I'm glad we're playing golf and it's a great way to start 2020."