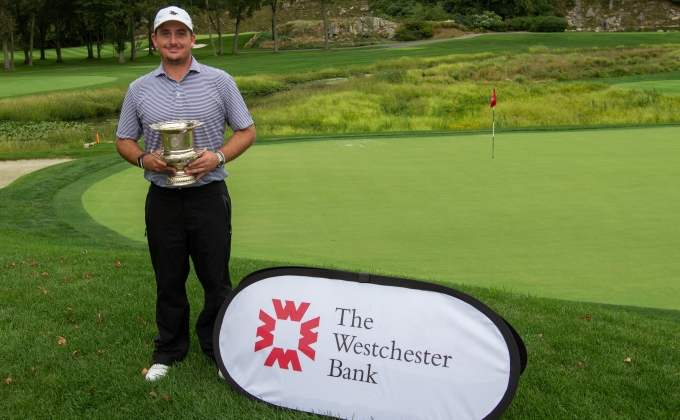 GREENWICH, Conn. (September 10, 2020) -- A 4-under 68 in the final round led Brad Tilley of Sleepy Hollow to a runaway victory and successful title defense in the 11th WGA Mid-Amateur Championship Presented by The Westchester Bank Thursday at Burning Tree Country Club. Tilley was the lone player to card a pair of sub-par rounds, shooting 70-68 for an eight-shot victory.

The day began with a bleak weather forecast which quickly halted play, as heavy rains saturated the course and led to a 1-hour, 38-minute suspension of play. However, once players returned to the course, few showers remained through the remainder of the day and allowed for successful completion of play.

"I felt I played really well [in the first round]. I didn't really know the course and I made, not errors, but I just needed to tidy up a little bit," said Tilley of his outlook entering the final round. "I've been playing really well of late and I just wanted to carry that over and kind of clean up where I left some out there in the first round."

Tilley entered the final round tied with MGA eClub - Westchester/Connecticut member Mark Watros, a former professional who was making his return to competitive amateur golf. While a couple early birdies quickly helped Tilley's cause, an eagle on the par-5 seventh hole moved him to 3-under on the day and extended his lead to four shots.

"You don't want to force it on the front," said Tilley of his game plan. "There are a lot of birdie opportunities, but you kind of have to wait and see where they're going to fall because if you get too aggressive you can get in a lot of trouble out there. I just tried to hit smart shots and I was definitely waiting for something to happen."

Tilley hit 3-wood, 8-iron to behind the hole on the short par-5, saying, "It was definitely a springboard and helped me carry momentum into the back, which is tough."

That proved itself as Watros fell off pace with three consecutive doubles to start the final nine.

With his lead quickly extending, Tilley remained poised and kept playing his game. "I've seen leads disappear, I've seen a lot of things. Golf's a fickle game and I just wanted to stay focused, stay aggressive and play the way I know I can play and try to do what I could do."

While Tilley had a pair of bogeys on the inward nine, he also rolled in a trio of birdies, with two late ones coming on the par-4 15th and par-4 17th.

"It's hard to win anything," said Tilley. "To get a chance to defend and do it successfully is a great feeling. It's an honor to be the champion again."

Tilley swept the New York State, Westchester and MGA Mid-Amateur championships in 2019. The NYSGA Mid-Am has been canceled for 2020, but Tilley will aim to also defend his title in the MGA Mid-Am, October 6-7 at Somerset Hills Country Club in Bernardsville, N.J.

Brian Flanagan of Rye used an even-par 72 to climb the leaderboard and finish solo second at 2-over for the championship. Al Tenembaum of Rockland and Eric Bleile of Sterling Farms followed, finishing at 3-over and 2-over, respectively. Tenembaum posted 1-under 71 for the day's only other sub-par score.

Mike Diguglielmo of Mahopac, Anthony Rubeo of Tamarack, David Peng of Griff Harris and MGA eClub - Westchester/Connecticut member Michael Kennedy tied fifth at 5-over 149. Max Adler of Winged Foot, Richard Feldman of Golf Performance Center and Jason Longo of Rolling Hills rounded out the top-10, tying for ninth at 6-over 150.

Those finishing in the top 5 will be extended an invitation for the 2020 MGA Mid-Amateur Championship.