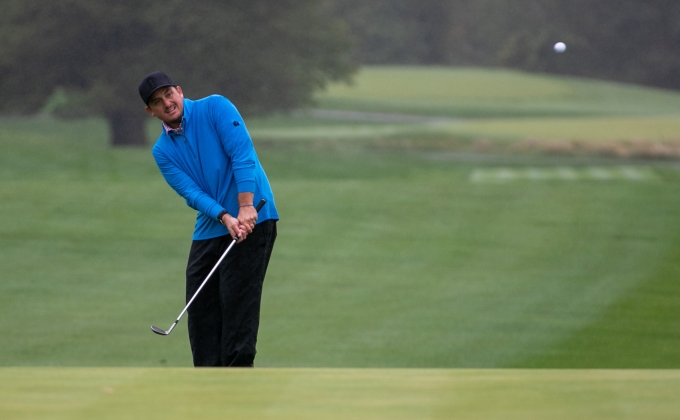 Brad Tilley chips from just short of the 18th green.

GREENWICH, Conn. (October 3, 2019) -- Despite cold, rainy conditions, Brad Tilley of Sleepy Hollow carded a 2-under 68 to open the 10th WGA Mid-Amateur Championship Presented by The Westchester Bank, Thursday at Tamarack Country Club. Tilley will carry a six shot lead into Friday's final round.

Tilley, carrying momentum from his runaway New York State Mid-Amateur Championship win just four days ago, began his round with four consecutive pars before making back-to-back birdies. Though his first miscue came on the par-3 seventh, he bounced back with another birdie on the par-4 eighth and made the turn in 2-under. Tilley added two birdies and two bogeys on his way in en route to the stellar 68 as rain fell throughout the day and temperatures barely eclipsed the 50-degree mark.

Friday's final round will begin at 8:00 a.m., with the final pairing of Tilley and Donnellan at 10:42 a.m. Scoring will include nine and 18-hole updates with additional coverage on the WGA Twitter.