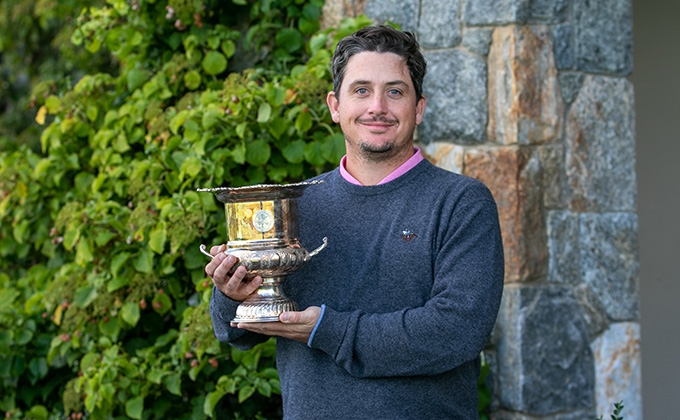 GREENWICH, Conn. (October 4, 2019) -- Facing windy conditions at Tamarack Country Club, Brad Tilley of Sleepy Hollow shot 5-over 75 to close out the 10th WGA Mid-Amateur Championship Presented by The Westchester Bank, post 3-over 143 and claim his second Mid-Am title in a six-day span.

Following his stellar 2-under 68 in Thursday's cold, rainy conditions, Tilley carried a six-shot lead into the final round. Though he made the turn in 3-over 38, he owned a five-shot lead with nine holes to play. Meanwhile, T.J. Trimboli of Shorehaven made an early move, shooting 1-under 34 on his opening nine. He continued his steady play down the stretch, carding two birdies to two bogeys for his 1-under 69 and the day's lone score under-par.

"I putted incredibly well round one and I think I putted well today too – it's hard to tell with the wind we had," said the 36-year-old Tilley who was making his debut in the WGA Mid-Amateur. "Inside of eight feet today, I was solid, so that was a huge strength."

The victory backs up Tilley's Sunday win in the New York State Mid-Amateur Championship, a three-round wire-to-wire victory. "Last week was a really big week for me. To win the New York State Mid-Amateur was incredible and to do it in the fashion that I did with the scoring record, then to come out in the first round here and put myself in good position with a 68 felt amazing," said Tilley. "To win two in a row is amazing and we'll see if we can keep it going."

The field faced tough conditions both day, enduring temperatures barely over 50 degrees along with rain on Thursday and steady winds on Friday. For Tilley, the conditions kept him focused every step of the way. "It's cliche, but it almost forces you into one shot at a time because you're so cold, you're so wet or the wind is beating you up so badly that you can't really get ahead of yourself," he said. "You really need to bear down on each shot and then it becomes endurance if anything. It's mental endurance, it's physical endurance, to be focused for that long and to have that many tough shots in those conditions."

Tilley will now look to make it three Mid-Am victories in a row as he competes in the MGA Mid-Amateur on Monday and Tuesday at Wee Burn Country Club in Darien, Conn.

Trimboli earned solo second at 6-over for the championship, while 2018 champion Dan Gabel of McCann and Colin Andrade of Bonnie Briar finished tied third at 10-over 150. Jason Jaworoski rounded out the top five with a 12-over 152.

Tamarack served as an outstanding host for the 10th WGA Mid-Amateur Championship Presented by The Westchester Bank, as its classic Charles Banks design tested players from tee to green. Even with the rainy conditions on Thursday, players raved about the course's conditions, especially the firm, smooth-rolling greens. Tamarack played as a par-70 from 6,579 yards in the final round.