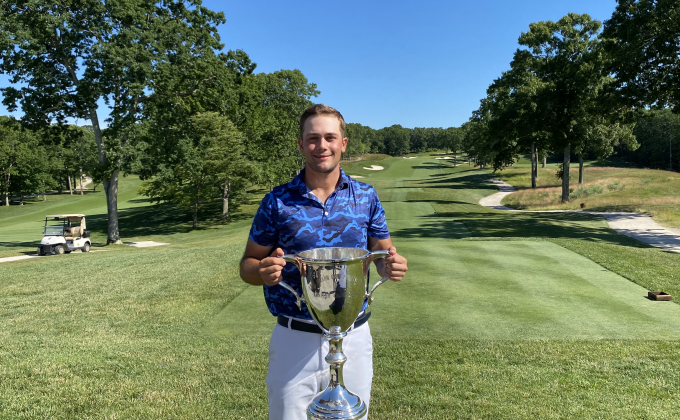 Tyler started the day slow, going down 2 early before battling back to even things up by the 10th hole. Then, a string of bogeys on the back-9 found him down 3 heading into the afternoon. He attributed his perseverance to his mentality throughout the week.

"I'm a very high-energy person and I always tell myself that you can get through it, you can get through it, just stick it out," he said. "I ate a cheeseburger at lunch, I was like might as well treat myself, being 3 down, get some protein in me. I was walking over to the first tee and I told my dad, let's go, we're pushing hard right away and putting every last bit of my soul into this."

His mindset going into the afternoon paid off, getting back to all square by the fifth hole. He took the lead just a few holes later after making a putt from the fringe for birdie to win the 8th hole. Shortly thereafter, he holed out for eagle from the greenside bunker to win the 9th hole.

"The big turning point for me that gave me the energy to finish that round was on 8 and 9," he said. "I picked my spot, that's what I was doing out of the bunker all week, and I was hitting my spot so I was playing the spin right, I was doing everything right. Kind've hit that one a little bit too far but it hit the pin and it went in...I'll remember it the rest of my life."

The back 9 was more of a battle. Gerbavsits extended his lead to 2-up thru 12, but Goldstein then won holes 13 and 14 to even the match. Gerbavsits reclaimed the lead on 15, and Goldstein tied it back up a hole later on 16. The match came down to the final hole, their 36th of the day.

"Darin got up and piped his drive, it was just in the right rough, and I got up and I gave every last bit of whatever golf swing I had left to hit a nice, low cut around that tree," he said. "Saw him make a little bit of a mistake and put it long left and I was like let's just go right at this pin, put it close and see what we can do."

Gerbavsits has been playing in LIGA events since 2012, when he began competing in Long Island Junior Boys events. This is his first LIGA victory, and it didn't come without some nerves.

"I dealt with nerves yesterday a lot in that second round against Garret Engel, and I think I actually, you know, learned from it and grinded my teeth a little bit and just got up and made sure to have the shakes and the nerves a little bit after the putt," he said. "It's really special...I played my first Long Island Amateur at Southward Ho in 2014 I think it was...it's been really special."

Gerbavsits will compete next at the 66th Ike MGA Stroke Play Championship on June 28-29 at The Bridge.