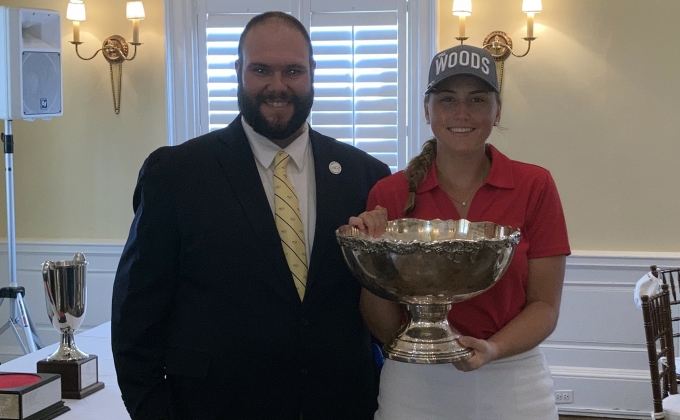 The LIGA's Tom Roden and the victorious Danielle Bambola.

FARMINGDALE, N.Y. (August 12, 2021) -- MGA eClub - Long Island member Danielle Bambola improved upon her round one score by six shots on the Red Course at Bethpage State Park, carding an impressive 72 on Thursday to claim the Long Island Women's Amateur Stroke Play Championship. After entering the final round in a three-way tie atop the leaderboard, Bambola edged out 2021 MGA/WMGA Women's Met Amateur champion Paige Diecidue of Smithtown Landing by three shots.

With the course playing as a par-75 for the championship, Bambola finished at even-par. Numbers 14-15 played as par-5s, with the usual par-5 16th completing three in a row, of which Bambola took advantage in the final round. "That stretch of par-fives on the back I was able to play well and that definitely helped my score in the end," said the SUNY Cortland standout. Bambola made birdies with fours on both 14 and 15, capping off an impressive stretch of seven holes she played in 4-under par.

For Bambola, carrying her practice performance into tournament play was key, especially on the greens. "With my putting, it's been such a journey finding a good stroke and keeping consistent so I feel like throughout this event it was about finding my groove and I practice that a lot," she said.

LPGA Amateur Golf Association member Yong Park claimed the net title behind an even-par final round, which bested her opening round by seven shots. Short game proved to be the difference maker between the two rounds for Park, who practiced putting dilligently Thursday morning in preparation for the final round.