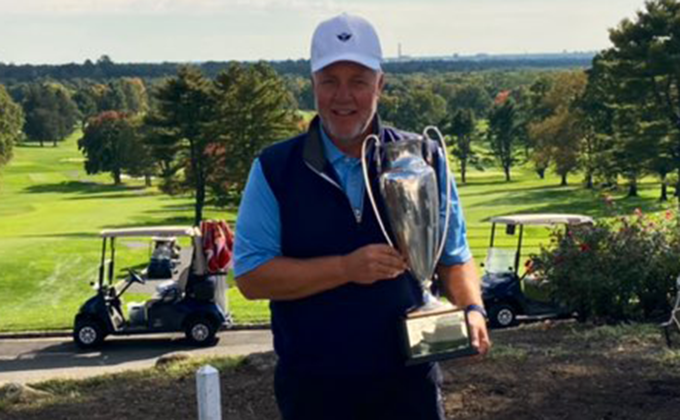 OLD WESTBURY, N.Y. (October 22, 2021) -- David Boccia of Huntington carded an even-par 72 in the final round of the 2021 Arthur Weber Memorial Senior Amateur Championship, but needed one more hole to take the title as he defeated Billy Byrnes of Nassau on the first playoff hole after both players came in at 3-over 147 at Old Westbury Golf & Country Club.

Boccia tallied two birdies and two bogeys en route to his 72, besting his opening round by three shots. He credited Friday's success to cleaning up his putting, keeping other aspects of his game sharp, and having more knowledge of the course.

"Yesterday I didn't putt all that well and today I putted really well and I hit almost every fairway so I was able to stay out of trouble all day," said Boccia. "Yesterday was my first time playing the course, so I was just trying to hit it in the middle of the greens. Some of the pins were really difficult with the undulation so I was aiming for the middle of the greens and sometimes they would roll the right way."

Living off the 10th hole at Huntington, Boccia also used his typical nightly routine to dial in his game for the win.

On a challenging scoring day, Dave Scialabba of Meadow Brook and Alan Specht both carded 4-over 76s to finish third and fourth, respectively. MGA eClub Long Island member Kurt Paseka, Ed Gibstein of Glen Head and Dennis Lynch of Baiting Hollow tied fifth at 9-over 153 for the championship.