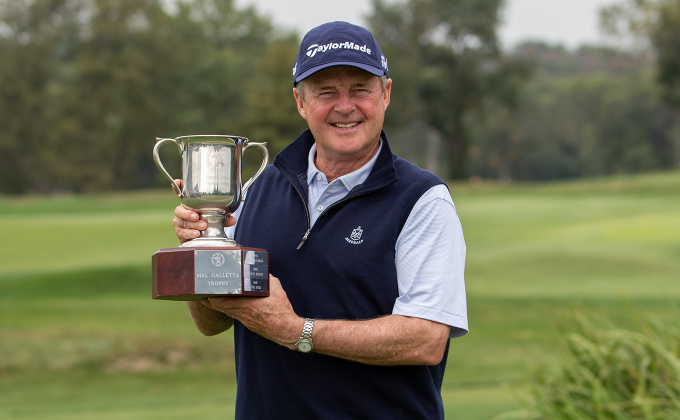 HUNTINGTON, N.Y. (October 13, 2021) – History repeated itself on Wednesday, as Darrell Kestner of Deepdale completed a come-from-behind victory to win the Long Island Senior Open Championship Sponsored by Steve Madden at Huntington Country Club. Kestner, who came from behind in 2019 to win at Atlantic, fired a bogey-free 3-under 67 in the final round to win by two shots and claim the title for the third time in his career.

“I had reminiscent thoughts about when I came from behind at Atlantic,” said Kestner. “You always want to reflect on good moments and good thoughts. So that was in the back of my mind and I played a nice round today, flawless, no bogeys, three birdies to better my age by one.”

Kestner began the day three shots behind first-round co-leaders Mark Brown of Pine Hollow and Scott Ford of Glen Oaks, knowing that a good round would likely move him up the leaderboard due to the challenging greens at Huntington. Kestner executed just as he needed to and remaining patient after a number of close calls.

“I was putting really well,” said Kestner. “Even though I didn’t make a lot of putts, every putt looked like it was going in. You can’t get frustrated out here.”

Kestner opened with seven consecutive pars before turning to the red with a birdie on the par-4 eighth. After six more pars, he closed with birdies on Nos. 15 and 18 to close the round.

On 18, Kestner faced 140 yards and knew just the club after having a similar distance and coming up short on the 16th hole. His 9-iron finished within six feet, but still left him a putt he needed to start outside the hole to the left.

“Jean Bartholomew, my playing partner, had about a 20-footer on the same line,” said Kestner. ‘Her ball rolled right by my coin and just broke home, so I had the perfect read—about one ball out. I just hit it perfect speed and it went right in.”

With Kestner a few groups ahead of the final pairing, he had to wait and see if his number would hold up. Ford reached 2-under for the championship with a birdie on the par-4 16th, but gave the shot back on the following hole as he found the left greenside bunker and couldn’t convert the save. A closing bogey led him to a tie for second alongside Mike Meehan of Old Westbury, who carded a 1-under 69 in the final round.

Gerard Connolly of Cherry Valley and David Segot of Nassau shared low-amateur honors, finishing the championship at 1-over 141, tied for fourth alongside Brown and Jeff Warne of The Bridge.

“It spurs you on. It validates the reason you practice and play this game. It’s a treat to play competition,” said Kestner. “It’s a thrill to win this Long Island Senior Open for the third time, especially on a golf course like this—Huntington Country Club—one of the gems on Long Island.