Aue, Butler to Square Off in Long Island Amateur Final

Aue, Butler to Square Off in Long Island Amateur Final 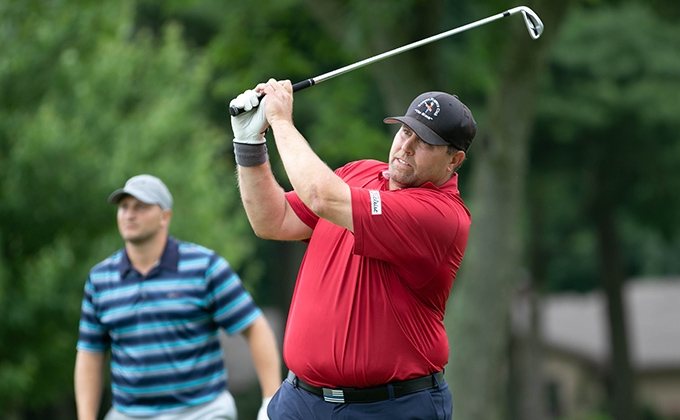 Butler, who began his run by taking medalist honors with a 4-under 66 on Monday, earned a pair of 2-and-1 victories on Wednedsay to advance as he defeated Ben Pirro of Long Island National and Dan Abbondandolo of host club Brookville. Despite a slow start in his morning match in which Pirro took a 2-up lead through seven, Butler clawed back with wins on Nos. 7 and 9 to square the match and used back-to-back wins on Nos. 14-15 to help seal the win. The rising sophomore at University of Alabama took a quick 2-up advantage over Abbondandolo, but the host member pulled even with wins on Nos. 5-6. Birdies on Nos. 8 and 13 returned Butler's lead to two holes and though Abbondandolo carded birdie after finding the par-five 14th in two, Butler won the 16th with a par-three and a pair of fours on No. 17 wrapped up the match.

Meanwhile, Aue continued rolling with wins by 4-and-2 and 2-and-1 margins over Kenny Doyle of Brookville and MGA eClub - Long Island member Chris Lambrou. Aue built a 4-up advantage through eight holes against Doyle. Though Doyle claimed three of the next seven holes, Aue also squeezed in back-to-back wins on Nos. 12-13 and added a birdie-two on the 16th to continue to the afternoon semifinals. Against Lambrou, the match stood tied through six holes, but Aue claimed Nos. 7, 9, and 11 to earn a convincing lead. Though Lambrou trimmed the lead to two on a pair of occasions, Aue secured his spot in the championship match with a birdie-three on the 17th.