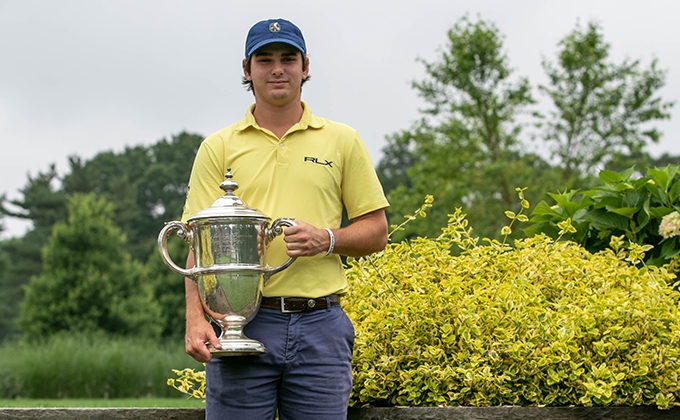 OLD BROOKVILLE, N.Y. (June 20, 2019) – A torrid start that included six birdies over the first 10 holes propelled Prescot Butler of Meadow Brook to an early 7-up lead over Russ Aue of Nassau Players and eventually led to an 11-and-9 victory for Butler in the 96th Long Island Amateur Championship Presented by Sterling National Bank, Thursday at Brookville Country Club.

Butler, who captured medalist honors with a 4-under 66 in Monday's stroke-play qualifying, was 5-under through those first 10 holes—birdieing Nos. 7-10—while Aue opened in 5-over to find himself seven down. "It's normally hard to start quick, so I figured that if I could make a couple birdies in the first few holes, it's a huge advantage," said the 20-year-old Butler of his goal to start quick in each match during the championship, including Thursday's 36-hole final.

While Aue righted himself on the morning's inward nine, Butler played the final eight holes in 2-over and the morning 18 ended with Butler still owning a 7-hole advantage.

The pair tied the afternoon's first three holes with pars following the lunch break, with Butler extending his lead on the short dogleg left par-four 4th. Aue had left his fairway approach pitch well short of the green and then could not get up-and-down. Meanwhile, Butler, who drove his ball over the trees on the hole and landed in the back left pot bunker, hit a poor sand shot that ran all the way over the green and stopped in the grass above another bunker. From there, he hit an indifferent chip to about 12 feet, but made the putt for a harum-scarum par to go 8 up.

After routine par-fours on the 5th, Butler made birdie on the No. 1 Handicap hole—the long dogleg right par-four 6th—by stiffing an iron to the back-center hole location to extend his lead to 9-up. He followed that by adding another birdie, again stiffing an iron to about six feet on the par-three 7th. When he made the putt—which was twice as long as the one conceded on the hole for birdie in the morning—he was 10 up.

They tied the par-four 8th with routine par fours and the match ended when Butler's four-footer for birdie on the punchbowl green 9th was conceded, with Aue having missed a 30-footer for birdie.

"It was a lot of fun and Russ was great," said the rising University of Alabama sophomore after the match. "I know he had a rough start, but he played pretty good the rest of the day."

For Butler, his run to the championship title was a big turnaround from a performance last week and now he's set for an exciting summer ahead. "I was actually really struggling," said Butler, who averaged 73.7 in 31 tournament rounds during his freshman campaign for the Crimson Tide. "I shot 79 or something in the New York State Open qualifier last week and I was kind of struggling off the tee. I was trying to shape it both ways and I decided to stick with a low cut and I just hit that on literally every single tee shot out here. It's the best I've driven it in a while," remarked Butler.

Though weather threatened throughout the week, the championship went on without a suspension of play and had superb conditions at Brookville Country Club. The Long Island Golf Association thanks the Club's Board, its members and staff for serving as such gracious hosts for the Long Island Amateur Championship—which was being contested at Brookville for the second time.