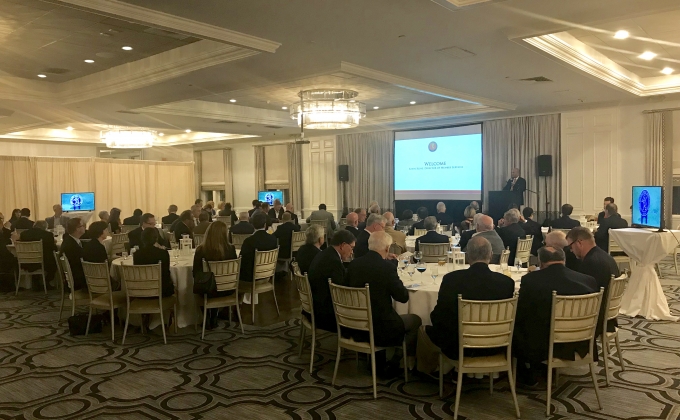 The night started with a summary of the LICSF’s record-breaking year, highlighted by the largest scholar recipient class in the Fund’s 56-year history. The LICSF gave out $287,000 in scholarship aid to 120 scholars for the 2018-19 academic year. A large part of this funding came from the success of two golf marathons, in which five teams raised a total $61,000 and played 618 holes.

Lastly, Fresh Meadow Country Club was recognized and awarded for the being the top contributing club during the 2018 season.

The night transitioned to a recap of the LIGA’s 2018 tournament season, as a video highlighting the year’s champions, including the victorious LIGA Stoddard Trophy team, played for those in attendance. Two players were also recognized for their outstanding tournament performances: Jay Sessa of Cherry Valley was awarded the Senior Player of the Year while Darin Goldstein of Deepdale received the Player of the Year.

In closing, the night ended with a transition of officers on the LIGA Executive Committee. Martin Winkleman of Glen Head finished his two-year term as President and passed the role on to incoming President George Gatta of Southward Ho. There was also a new addition to the officers, as Jay Sessa of Cherry Valley assumes the role of Secretary