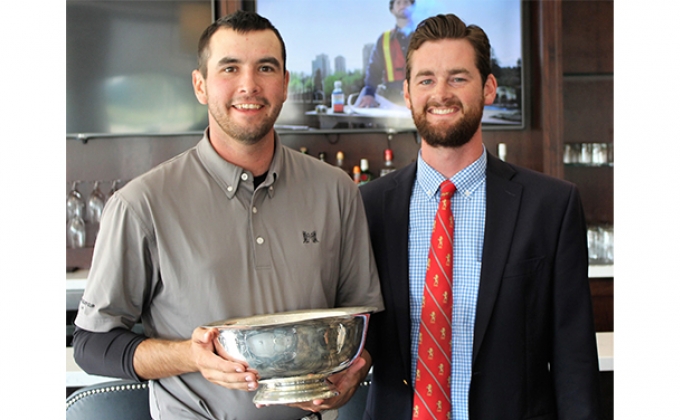 HEWLETT HARBOR, N.Y. (October 20, 2018) - Jay Card III of Gardiners Bay won the Championship Division of the 71st annual Richardson Memorial Championship on Saturday, October 20th at the Seawane Club in Hewlett Harbor by defeating Darin Goldstein of Deepdale by 4 and 3 in the final match. Senior Masters Division co-medalist Jay Sessa of the Cherry Valley Club won his third (and second consecutive) title in that division when his co-finalist withdrew from the final match because of a scheduling conflict.

In the Championship Division final match, both players drove it in the fairway and put their second shots on the green on the first hole, but only Goldstein sank his putt for birdie to go one up. They then halved with pars both the long second hole and the shorter, water-surrounded third (back into the north wind, which was blowing at 10 to 15 mph, with stronger gusts). However, Card squared the match when he drove the downwind fourth green and two-putted for birdie, while Goldstein's drive went over the green and he could not get up and down. They halved the par three fifth with pars, when Card got up and down and Goldstein two-putted from across the green on the right. They both reached the dead downwind 480 yard sixth in two, but Goldstein again was the only one to make a putt, as he went one up for the second time. Both drove it in the fairway against the wind on the long seventh, but Goldstein gave up the lead for the second time when he short-sided himself by missing the green right, stubbed his chip and failed to sink the next chip. Meanwhile, Card hit the green in regulation and two-putted from the front edge to a back right hole location.

On the short eighth, with the wind pushing shots to the right, Card put his shot on the putting surface, right of the two-thirds right hole location. Goldstein's tee shot was not as good, ending up pin high further right, but in the right-side portion of the bunker that wraps around two sides of the green. From the sand about 20 feet below the green surface, Goldstein ran his shot by the hole some 25 feet, and could not make the putt. Card's 18 foot putt ended up well within concession distance, and he went one up. He would never relinquish that lead.

On the downwind par five ninth, Card drove the ball well past the line of bunkers that moves away from the tee as it crosses the fairway from left to right, but Goldstein's drive ended up in the rightmost of those bunkers. He therefore could not go for the green with his second shot, while Card put his second shot on the green and two-putted for a birdie and a win to go two up.

Both players made a hash of the short tenth (a hole which Sessa has called the most difficult on the course). However, although Card could not get up and down from the swale behind the exceedingly-shallow green, his two-putt five was good enough for a win when Goldstein hit his second into the greenside vertical wall of the front right bunker, got his very awkward chip from a hanging lie onto the green, but then three-putted for six. Card was now three up. They halved the longish par three 11th into the wind (when Goldstein two-putted for par and Card got up and down from the left side), halved the downwind short 12th with birdies (when Card drove the green and Goldstein got up and down with a superb sand shot from a front left bunker by putting enough backspin on the ball to stop it dead, inside concession range; stopping a ball from in front of this green is a difficult feat, as the green appears to run slightly uphill from front to back, but actually plays downhill) and halved the tricky 13th with regulation pars, despite a crosswind pushing balls towards the left side canal.

Having made it through the previous three holes with his three-up lead intact, Card then increased it when he hit his tee ball on the par three fourteenth straight, but just short of the green. Goldstein did not do as well, as his ball also came up short, but in the right front bunker below the green. His sand shot to the back right hole location came out too hot, landed on the far side of the trough that horizontally-bisects the large, Biarritz-style green and rolled left of the hole, across the back portion of the green and down into the collection-area swale in back. From there, the best he could do was hit his recovery chip 30 feet past the hole, on the wrong side of the trough. Goldstein needed to make the quite-difficult putt for four to give himself a chance at a half, but when it slid by the hole on the left, he conceded Card's 12-footer for three. Card was now dormie, and there is no hole on the course which today played more to Card's strength off the tee than the long, into-the-wind par five 15th. An indication of that power is the louder and sharper sound Card's driver makes when it strikes the ball. Since Goldstein had to win the hole to prolong the match, his work was really cut out for him. They each hit two good drives in the fairway, but Goldstein was more than 50 yards further from the green than Card after their good second shots. So, when they both put their third shots on the green (Card significantly inside his opponent), Goldstein conceded Card's putt for five and the match when they both missed their birdie putts.

Card hit eight fairways to Goldstein's seven, and the putting was relatively even (Card had three one-putts, and Goldstein had four, plus one three-putt), but the match really turned on Card's hitting two more greens in regulation or better (11 to 9 over the 15 holes) and never being in a bunker, while Goldstein found four bunkers, and was only able to hit a saving shot out of the one on twelve.

Congratulations to Jay Card and Jay Sessa, and thank you to the members and staff of the Seawane Club, for their outstanding support of the Richardson since its inception in 1948. Green Superintendent Brian Benedict, General Manager Don Molitor, Head Golf Professional Tyler Jaramillo and starter/caddymaster Lance Bachelder and their staffs go far out of their way to maximize the Seawane experience for the competitors and the LIGA and MGA staff and volunteers. They make the Richardson an event that draws competitors from all across the metropolitan area, and we are deeply grateful for their efforts.