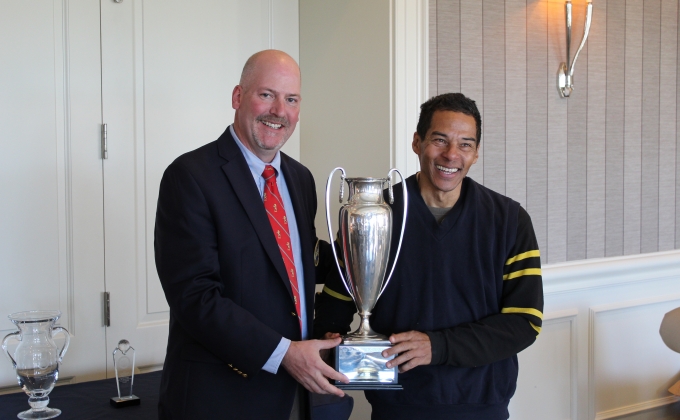 OLD WESTBURY, N.Y. (October 25, 2018) – Play was extremely competitive at this year’s Arthur Weber Memorial Senior Amateur Championship as a playoff was needed in order to determine a champion. Drew Fonrose of Middle Bay and David Prowler of Bethpage sat atop the leaderboard at the end of the day with rounds of 4-over 76. The two players went into a sudden death playoff, as Fonrose was able to secure the Arthur Weber trophy with a par on the first playoff hole while Prowler’s par putt slid just past the hole on the right edge.

Net prizes were also given in the Senior division, as Howard Stern of Inwood grabbed low net honors with a round of 5-over 77 while Douglas Jaeckel of Nassau Players earned 2nd low net with a card of 6-over 78.

In the Super Seniors division, Michael Birmingham of Nassau Players finished low gross with a round of 6-over 78 as Peter Hirsh of Old Westbury finished just behind with a card of 7-over 79. As for the net category, Frank Vitale of Nassau Players grabbed the low net trophy thanks to a round of even par 72 while John Letourneau of Crab Meadow finished 2nd low net with a 6-over 78.

Lastly in the Legends division, Richard Schmidt of MGA eClub – Long Island earned low gross honors with a round of 7-over 79, while Martin Winkelman of Glen Head grabbed 2nd low gross honors with a card of 11-over 83. Frank Lamonica of Smithtown Landing finished with low net honors thanks to a round of 1-over 73 and Peter Cardasis of Nassau Players took 2nd low net with a card of 4-over 76.