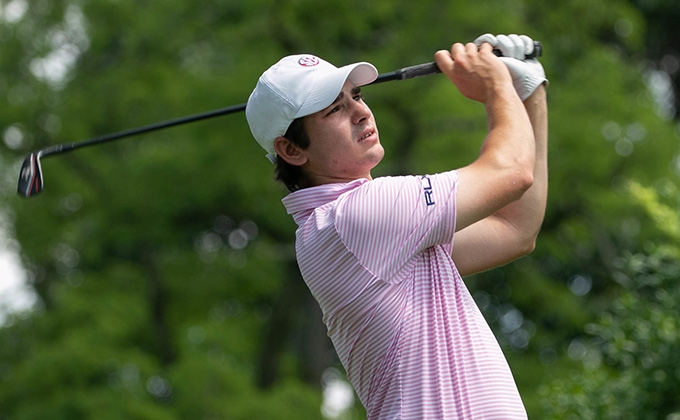 OLD BROOKVILLE, N.Y. (June 18, 2019) -- The quarterfinal round is set at Brookville in the 96th Long Island Amateur Championship Presented by Sterling National Bank, as a starting bracket of 32 players was trimmed down to eight after two rounds of matches on Tuesday.

After claiming medalist honors on Monday with a 4-under 66, Prescott Butler of Meadow Brook continued his hot play at Brookville with impressive victories by 6-and-5 and 6-and-4 margins. The rising sophomore at Alabama is slated to take on Ben Pirro of Long Island National, who also earned a pair of convincing wins by margins of 4-and-3 and 6-and-4, Tuesday.

Meanwhile, reigning champion Colby Anderson was upended by Russ Aue of Nassau Players by a 3-and-2 score, opening the way for a new champion in 2019. Aue faces host club Brookville's very own Kenny Doyle on Wednesday morning.

Reigning Long Island and Metropolitan Golf Association Player of the Year Darin Goldstein of Deepdale was defeated in the Round of 32, as MGA eClub - Long Island member Chris Lambrou took a 3-and-2 win over Goldstein. Lambrou followed that performance up with a 2-and-1 victory over Dennis Lynch of Nassau Players to advance to the quarterfinals, where he will face Bryan Pendrick of Mill River.

Brookville is also represented in the quarterfinal by Daniel Abbondandolo, who notched a pair of 4-and-3 wins, Tuesday, and will face Brad Barnett of Cherry Valley on Wednesday morning. Barnett prevented yet another Brookville competitor from advancing to the quarterfinals, but rallied from a three-hole deficit to defeat Matthew Spagnoli, 2-and-1, in the Round of 16.

Wednesday's matches begin at 7:30 a.m., with semifinal matches slated for the afternoon. The final two players then face off in a 36-hole final on Thursday for the title.