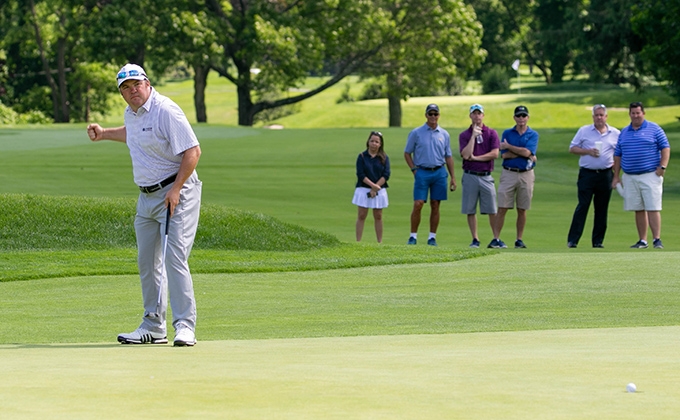 Andy Svoboda pumpts his fist as he holes a 33-foot putt for birdie on the 54th hole of the Long Island Open to force a playoff.

HEMPSTEAD, N.Y. (June 6, 2019) -- Holing a combined 105 feet of putts on consecutive holes propelled Andy Svoboda of Engineers to successfully defend his title in the  Long Island Open Championship Presented by Stifel, Thursday, at Hempstead Golf & Country Club. Facing a one-shot deficit, Svoboda sank a 33-foot birdie try on the 54th hole to tie Nick Beddow of Nassau Country Club at 7-under 206 for the championship and force a three-hole aggregate playoff. Svoboda followed that clutch effort with a 72-foot bomb for eagle on the par-four 1st hole, taking a quick two-shot lead and eventually winning the aggregate victory by a score of 9 to 12.

Beddow played solidly down the stretch, making birdies on Nos. 14-15 to grab a one-shot lead, after both players entered the final round at 5-under overall. A Svoboda bogey on the par-five 15th extended Beddow's lead to two shots, but Svoboda wasn't ready to give up his position as Long Island Open champion so easily. On the par-four 16th, Svoboda played aggressively and hit driver to within 40 yards of the green.

"My caddie Richie talked me into hitting driver on 16," explained Svoboda of the play, where he initially held an iron in his hands. "I only had about a 40-yard pitch and I was able to pitch it up there to a foot and put some pressure on [Beddow]."

After getting up-and-down on the par-three 17th, Svoboda knew everything was on the line on the final hole and especially his birdie putt.

"I knew it was a do-or-die putt," said Svoboda of his birdie look on the 54th hole. "I got lucky because I got the read off of Nick's putt and I knew it was pretty straight, about right center, and was thinking just get it to the hole. Amazingly enough, I made it."

Playing the drivable par-four 1st hole to begin the playoff, Beddow sent his drive over the green and faced a challenging chip shot. After putting it to 15 feet, Svoboda drained his effort from the right fringe putting to the back left hole location.

"I was just trying to two-putt to be honest," said Svoboda of the putt. "I got lucky and dinged the pin and it went in, so it was a very lucky putt."

Both players tallied threes on the 17th, while Svoboda closed with a par to Beddow's bogey on the last, earning Svoboda the three-shot victory in the aggregate playoff and giving him his second straight title in the championship.

"I thought I had a chance, but it's hard to defend. I played real consistent and was able to keep my focus and play three good rounds," closed Svoboda, who will also have opportunities to defend this summer in the New York State Open and Met Open following his fantastic 2018 campaign.

Beddow and Svoboda had separated themselves from the field, with Old Westbury's Matt Sita finishing solo third at 3-under for the championship. Anthony Aruta of North Shore and Kyle Brey of Bethpage State Park rounded out those finishing in red figures at 2-under and 1-under, respectively. Host club member Christopher White claimed low amateur honors, finishing tied for eighth at 1-over (71-72-71) for the championship.

Hempstead showed its challenge over the three days, testing Long Island's top professionals and amateurs from tee to green. The A.W. Tillinghast layout, which presented superb conditions for the championship, played as a par 71 from 6,733 yards during the final round.