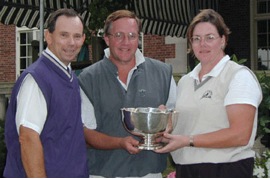 Elmsford, N.Y.--Woodway Country Club’s duo of John Madigan III and Sheila Torgan teamed up to fire a three-under par 68 (34-34) to capture the 38th MGA Mixed Pinehurst Championship today at The Muttontown Club in East Norwich, NY.  The two combined to card a total of three birdies and no bogeys to edge out Alpine Country Club’s team of Adam Kugler and Helen Bernstein, who finished three shots back at even-par 71 (35-36).  Defending champs Vic Gerard and Sherry Herman of Shore Oaks were not on hand to defend their title.

The championship was played in an 18-hole pinehurst format that had players competing at 40% of their teams combined course handicap.  A total of 168 golfers competed, with prizes awarded to the top four teams in both the gross and net divisions.

For more information on the 2001 MGA Mixed Pinehurst Championship, contact Richard J. Cerame or Gene Westmoreland of the MGA @ (914) 347-GOLF.