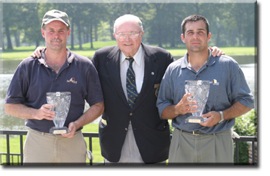 he playoff concluded one of the most competitive Met Net’s in recent memory with only one stroke separating the top ten teams. With 90° temperatures for the first time this year the playoff itself included some drama. Walking the fairway after his tee shot on the first playoff hole, Fitton was stricken with an acute case of cramps but held on to knock his approach on the green and proceeded to sink a 25-foot birdie putt. The championship was sealed after Deer Run’s four-foot birdie attempt missed the target.

Both Cassetta and Fitton credited their victory to two birdies at the difficult 428-yard 17th hole. “Having both of us birdie 17 was the key,” Cassetta said. “We both put it within ten feet, and Michael sank his first.” After the playoff was concluded Blue Hill and Deer Run matched scorecards to determine second and third place.

This year with the support of MetLife, more than 2,000 teams competed at the club level for the right to advance to the three sectional qualifying rounds which produced the 47 teams that competed today in this 18-hole stroke play, net better-ball, with players competing at 90% of their course handicap.

Full results can be viewed by clicking here. For more information contact Ryan McKenna or Gene Westmoreland of the MGA @ (914) 347-GOLF or visit the MGA website at mgagolf.org.