The Golfing Union of Ireland jumped to an early lead in the morning foursome matches when the GUI team of Mark O’Sullivan and Mark Campbell went five up through ten holes over Andrew Svoboda, of Winged Foot, and Michael Quagliano, of Knollwood. Svoboda and Quagliano battled back, however, and got to one down with two to play only to get closed out on the 17th with a birdie by the Irish to claim the first point of the day.  All square through five holes in the second match, the GUI team of Brian McElhinney and Darren Crowe took the lead over MGA’s Patrick Pierson, of Minisceongo, and Pete Meurer, of Silver Lake, on the 6th hole and held on to win 3 and 1 on the 17th.  Despite leading for most of the match, MGA team of Adam Fuchs, of Hamlet Windwatch, and Mark Thompson, of Plandome, dropped to one down with one to play and managed a half point after the GUI Team of Niall Turner and Clancy Bowe bogeyed the final hole.

The afternoon fared better for the Americans with the exception of the Fuchs-Thompson team who were closed out early by GUI team of Crowe and John Foster, with a score of 7 & 6.  The GUI’s Mark O’Sullivan and Clancy Bowe were able to earn ½ point, in a match that they never led, with O’Sullivan’s heroic 30-foot birdie putt on the 18th hole.  MGA’s Svoboda and Quagliano earned ½ point in their hard-fought match against Brian McElhinney and Michael McGeady, in which no team ever led by more than one hole.  The MGA team veterans Allan Small (53), of Fairmount, and Peter Zurkow (50), of the host club, earned the team’s only victory for the day, as they edged out Mark Campbell and Niall Turner on the 18th.  Turner and Campbell fought back from three down with four to play to one down on the 18th, but the teams exchanged pars on the final hole and gave the MGA team its first whole point of the match.

The Carey Cup Matches were inaugurated in 1996 by former New York State  Governor Hugh L. Carey to foster sportsmanship and goodwill between 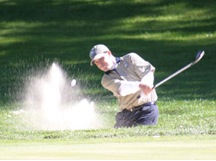 the two countries.  The matches alternate bi-annually between the Met Area and Ireland and feature the top eight male golfers from both sides in a two-day Walker Cup style competition. Singles Matches are scheduled to begin at 8:30 AM on Wednesday.  Spectators are welcome.