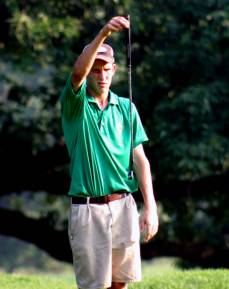 SPRINGFIELD, N.J. (August 2, 2006) – On an oppressively hot day at Baltusrol Golf Club, Chris DeForest of Cottekill, New York kept his cool down the stretch and won the 4th Carter Cup Invitational-MGA Stroke Play Championship. DeForest finished with consecutive birdies on the famous par-five 17th and 18th holes on Baltusrol’s Lower Course to win by a six-stroke margin over defending champion Morgan Hoffmann of Wyckoff, N.J., and Max Bichsel of Cranbury, N.J. After a morning round of three-under-par 69 on the Upper Course, DeForest shot a one-under-par 71 in the afternoon on the Lower Course, for a 140 total.

DeForest, the son of Rondout CC head pro John DeForest, was able to outlast a field of accomplished junior players on a day when the temperature climbed over 100 degrees. It was DeForest’s first MGA victory, and his 69 was the low round of the day among the field of 40 players.  With this victory DeForest receives an exemption into the 2007 Ike MGA Stroke Play Championship.

“I hit the ball great today… the best I have all year,” said the soon-to-be senior at Rondout Valley High School. DeForest steadied himself after what he termed a “rough start” in his afternoon round. “I made three bogeys and was three over through five holes. But my strategy was just to forget it and keep playing. I was hitting the ball great, so I knew it was going to come.”

The Carter Cup Invitational is named in honor of Michael P. Carter, former Baltusrol Junior Club Champion, who died in an automobile accident in 2002.  The Carter Cup also serves as the MGA Junior Stroke Play Championship.

The Metropolitan Golf Association thanks Baltusrol Golf Club for once again hosting this prestigious event. Further, we also wish to recognize the Carter family for their continued courage and support, which will continue to make the Carter Cup one of the most coveted titles in The Met Area.