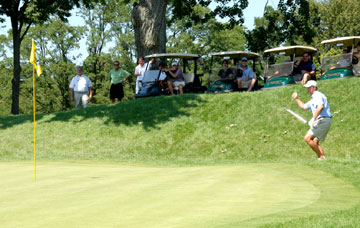 NEW ROCHELLE, N.Y. (August 5, 2007) – It was a triumphant return to Wykagyl Country Club for Greg Rohlf, who won the 105th Met Amateur Championship today on his former home course with a 5 and 4 victory over Marc Issler of Pine Barrens (N.J.). Rohlf, a former Wykagyl member who now plays out of Winged Foot, built a 2-up lead after 18 holes and never relinquished control during the remainder of the 36-hole final. The victory marked the second Met Amateur win for Rohlf and third MGA major victory overall, the others being the 1998 Ike Championship, also at Wykagyl, and the 1999 Met Amateur at Deepdale. Rohlf was also the 1998 MGA Player of the Year.

The matchup of the 42-year-old Rohlf and Issler, a senior at High Point (N.C.) University, was closely fought until Rohlf pulled away in the middle of the afternoon 18. Issler, who was the on-site medalist with rounds of 69-66 in stroke play qualifying, took a brief 1-up lead in the morning after a birdie on the 14th hole, and held that lead until the 16th hole. However, he bogeyed the last three holes of his morning round to allow Rohlf to win three holes in a row and enjoy a 2-up lead between rounds.

As the players teed off in the afternoon 18, Issler won the opening hole with a birdie to Rohlf’s par to cut the lead to 1-up. On the second hole, Rohlf hooked his drive near the tree line, while Issler hit the green in two. However, Rohlf would pull off one of the best par saves of the week. After chipping out, Rohlf hit his 151-yard third shot from the rough to 10 feet and made the putt, putting the pressure on Issler, who three-putted. It was a huge swing in the match that set the tone for the afternoon.

Issler again pulled to within 1-down after the seventh hole, but from there Rohlf began to extend the lead even further. After winning the eighth and ninth holes, Rohlf arrive at the par-five 10th hole – the 28th hole of the match – and chipped in from behind the green to a back-right hole location for a stunning birdie and a 4-up lead. The chip-in energized the crowd and Rohlf cruised to victory from there.

Rohlf plays a limited tournament schedule these days, but had his eyes on this event because of the host course. “My goal this year was to win this thing,” said Rohlf. “I don’t know how realistic that was, but it was my goal. Now that it’s over, it’s incredible and so special to win this championship again, and to win it at Wykagyl.”

While the focus was on youth after stroke play qualifying on Thursday – 14 of the 16 players who advanced were in their teens or 20’s – in the end it was a seasoned veteran with some home course knowledge who took home the trophy.