Foley Leads After First Round at Ike

Foley Leads After First Round at Ike

WEST CALDWELL, N.J. (June 23, 2008) – It was a day for scoring at the 53rd Ike Championship, presented by Canon USA, and Kevin Foley of Neshanic Valley took full advantage of the conditions. The 21-year-old Penn State junior fired tournament record-tying, six-under par 65 to lead a very competitive first day of play at Mountain Ridge Country Club. Two strokes behind Foley is 18-year-old Morgan Hoffmann of Arcola, who was the midday leader after his morning round of 67. Hoffmann and Foley were two of nine players who shot under par on the 6,867-yard layout, which was softened by weekend rains and today’s warm, humid conditions. 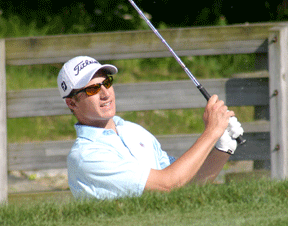 Throughout the storied history of the Ike Championship, only two players can claim rounds equal to what Foley accomplished today – George Zahringer III in 1993 at Preakness Hills and Johnson Wagner in 2002 at Montclair Golf Club. A brief early afternoon shower further softened the 6,851-yard layout, making the difficult greens receptive to approach shots and allowing players to stay in the fairways with well-played drives. This played into the hands of this year’s highly talented field, as 11 players were able to equal or better par of 71.

“I really like this golf course, and there were some birdies to be had out there,” said a characteristically understated Foley after his round. Foley, who earned All-American honors in his sophomore year at Penn State, added “I bogeyed 18 so it could have been even better. But I’m really happy with the way I’m swinging right now.”

Beyond the marquee names of Foley and Hoffmann, the leaderboard is sprinkled with a veritable “who’s who” of amateur talent in the Met Area. In a two-way tie at three-under 68 are Russell Giglio of Sprain Lake and Sean Davy of Plainfield West, and one stroke farther back at 69 are 2007 MGA Mid-Amateur champion Michael Reardon of Tuxedo and 2006 Carter Cup champion Chris DeForest of Rondout. Andrew Giuliani of Van Cortlandt, the 2005 Ike champion and 2006 MGA Player of the Year, is five strokes out of the lead after a one-under round of 70.

A field of 103 players began today’s first round, and the cut came in at a record-tying low of four-over 75. Forty-four players will play the second and third rounds on Tuesday to determine both the individual and team Ike champions. Though the 36-hole second day of the Ike is a physical test of stamina, it does not necessarily favor the younger players in the field. Last year, 54-year-old George Zahringer III outlasted a strong field of collegians in 95-degree heat, and the classic layout at Mountain Ridge is a favorite of the more experience players. Michael Reardon said after his round, “I love this course. I grew up playing on a Donald Ross course in Rhode Island so I feel very comfortable here.”

There are three clubs still alive in the Ike team competition, which is open to two players from the same club who both make the cut. Nassau Players Club (Casey Calmi and Dave Segot), Mountain Ridge (Jay Blumenfeld and David Weiniger) and Huntington (Joe Saladino and Dave Boccia) will be battling it out for the Ike team title on Tuesday.