JACKSON, N.J. (June 16, 2008) – The 58th MGA Father & Son Championship will be held on Tuesday, June 17, at the outstanding Metedeconk National Golf Club in Jackson, New Jersey. This event, begun by the MGA in 1951, is one of the oldest father/son competitions in golf, and is annually one of the most popular events on the MGA calendar. This year, the event was filled to capacity in a matter of days, as father/son teams from across the Met Area look to compete at one of the most highly regarded private clubs in the Northeast. Metedeconk National is a 27-hole facility that has hosted a Met Open (2003), an Ike Championship (1996), and the inaugural Governor Hugh L. Carey Challenge Cup Matches (1990) between the MGA and the Golfing Union of Ireland. 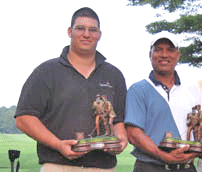 The field for this year consists of 108 father/son teams, including three previous champions of the event. Defending champions John and Pravin Singh of Kutsher’s will look to become the first repeat winners since Peter and Greg Bisconti took the titles in 1993 and ’94. Essex County Country Club member Michael McBride Sr., who won with his father, Joe McBride, in 1970 and with son Michael Jr. in 2001, is entered this year with son Matthew. Another family with past success in the Father & Son are the Muccis of Montclair Golf Club. Kerry Mucci won with his father, Pat Mucci, in 1973, and will attempt to win again this year with son Matthew. Bob and Chris Housen, who won in 1996, will try again this year to claim a second father/son title.

The MGA Father & Son Championship is conducted in an 18-hole Pinehurst format, with 40 percent of the team’s combined handicap for the net division. The championship features father/son teams competing for both gross and net prizes. Due to the size of the field, all three nines at Metedeconk National will be used.