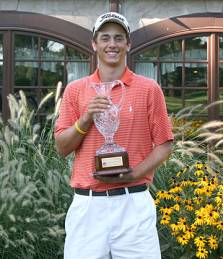 ELMSFORD, N.Y. (August 27, 2009) – Adding his name to a trophy that is already engraved with the likes of Walter Hagen, Gene Sarazen and Byron Nelson, 23-year-old Andrew Giuliani won the 94th Met Open Championship at Ridgewood Country Club for his first victory as a professional. It is the biggest win of his young career, and one he hopes will catapult him to success on the professional tours. Giuliani, the overnight leader, shot a second consecutive round of even-par 71 for a three-round total of three-under-par 210. The Met Open is sponsored by longtime MGA corporate partner Met Life, and with the victory, Giuliani takes home $27,500.

Finishing in second place was Jerry Courville Jr. of Shorehaven, who shot a second consecutive round of 69 to come in with a total of two-under 211. Tying for third at one-under-par 212 were 2003 Met Open champion Andrew Svoboda of Old Oaks and 2009 New Jersey State Open champion Brett Jones of Trump National-Bedminster, who played in the final group with Giuliani. They were the only four players to finish the 54-hole, stroke play championship under par on the par-71 championship course at Ridgewood.

“This is a big-time first step,” said Giuliani afterward. “To win a championship like this for my first pro victory in my home area, it’s just awesome. It’s the culmination of a lot of work I’ve been doing on my game and hopefully it’s a step onto even greater things in the future.”

Earning low amateur honors was 17-year-old Sam Bernstein of Century, who finished at two-over-par 215 to tie for seventh. The low round of the day was turned in by Frank Esposito of Brooklake, who shot a three-under-par 68 and finished tied for fifth at even-par 215, as did Sean Farren of the Creek.

As the early afternoon wore down to the final stretch, Giuliani and Jones separated themselves from the rest of the field and it looked like it would become a battle between the two of them. Jones birdied the par-three 15th, and then both he and Giuliani birdied the 16th, allowing Giuliani to hold a one-stroke lead heading to the par-five 17th hole. Both players left themselves wedge shots into the green, and Giuliani was the first to play and hit his approach just beyond the green. He was faced with a tricky lie in the rough but managed a fantastic pitch that came to rest four feet from the hole. Jones missed his birdie putt as both players headed to the final hole with Giuliani still holding the one-shot advantage.

On the 18th, Jones was first to play and drove his tee shot into the right rough, where the large Ridgewood oak trees loomed between his ball and the hole. Giuliani’s drive found the second cut of rough on the left-hand side, and he proceeded to find the deep greenside bunker on the left side. Jones needed magic on his shot from the trees, but caught a branch and was left with 150 yards for his third shot. He hit the middle of the green, while Giuliani blasted out from the bunker and was wowed when the ball, which originally came to rest about 12 feet away, trickled back 22 feet from the hole. But at the end of the day, it was Giuliani who two-putted his way to victory, greeting his caddie with a big hug and an even larger embrace saved for his mother in the middle of the green.

“The MGA is known for their outstanding championships, and this week was no exception,” Giuliani stated at the awards ceremony. “The Met Open is always conducted on the best courses, and Ridgewood was absolutely perfect for us.” After traveling around the country for the last eight months, it is only fitting that Giuliani’s first win as a professional comes in his own backyard.