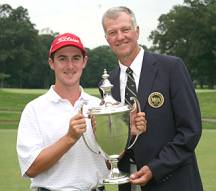 ELMSFORD, N.Y. (August 9, 2009) – Youth was served in one of the oldest championships in golf, as 16-year-old Cameron Wilson of Shorehaven finished off an outstanding week with an impressive 4 & 3 victory over John Ervasti of Sleepy Hollow in the final of the 107th Met Amateur at Hackensack Golf Club. Wilson, a rising high school senior who turns 17 in November, broke the record as the youngest Met Amateur champion in history, eclipsing fellow Shorehaven member Tommy McDonagh, who set the previous age record (17 years, 3 months) in 2006 at Baltusrol. His victory is also the eighth by a member of Shorehaven Golf Club in Norwalk, Connecticut. The others are Jerry Courville Sr. in 1973 and ’79, Jerry Courville Jr. in 1995, ’97 and ’98, and Tommy McDonagh in 2006 and 2008.

“It feels really good. I’m too drained to think about it too much, actually. I’ve played a lot of golf this week and I was too tired to celebrate when I won,” said Wilson. “But I know it will really sink in once I get some rest.”

This was Wilson’s second MGA championship victory this week. On Wednesday, he triumphed in the Carter Cup, the 36-hole MGA junior stroke play championship, at Baltusrol. He was able to sustain his strong play through 36 more holes of stroke play at Hackensack on Thursday, followed by match play victories over Michael Quagliano of GlenArbor, Colin Dolph of Nissequogue on Friday, and Sean Curtin of Orange County on Saturday to advance to today’s 36-hole final match against the 54-year-old Ervasti, the runner-up in the 2008 MGA Mid-Amateur at Bayonne.

Wilson began the final against with a bogey and a par, while Ervasti made par and birdie to jump out to a quick 2-up lead. Wilson came back to even the match through the eighth hole, but then three-putted the par-four ninth to allow Ervasti to take a one-up lead through nine holes.

“I knew there was a lot of golf left to play and there were more par fives and birdie opportunities, so I wasn’t nervous when he took the lead,” said Wilson.

His comments rang true as the match continued to the par-five 10th hole, where Wilson began to take control. The 10th hole at Hackensack is 522 yards, and like the PGA Tour pro that he hopes to become one day, he feasted on the reachable par five, playing it in 8-under par for the week with four birdies and two eagles, including one today that required only a three-foot putt to square the match with Ervasti. Wilson then went on to win the par-four 13th, the par-four 16th and the par-three 17th holes with birdies to take a 4-up lead through 18 holes.

The players resumed the match at 12:00, and Ervasti began to immediately put heat on the youngster. Ervasti drained a 40-foot birdie putt on the first hole (19th of the match) to win the hole and go 3-down. He kept the momentum going with a second birdie at the next hole, putting pressure on Wilson and trimming his lead to 2-up. Wilson won the par-three third hole, as he did in the morning, but Ervasti again closed to within 2-down with a sensational up-and-down at the par-four ninth hole (27th of the match), again holing a long putt.

However, just as he did in the morning, Wilson took advantage of the 10th through 13th holes at Hackensack. He used his prodigious length and accurate approach shots to pile up more birdies, including a two-putt birdie on the par-four 13th hole (31st hole of the match), where he hit the green and nearly holed his drive on the fly. That increased his lead back to 4-up, and he made two routine pars to close out the match on the par-five 15th hole, 4 & 3.

Wilson assessed his play following the win: “When one thing wasn’t working, another thing was. Today I hit the ball really well, whereas earlier in match play I was putting really well.”

Both players were supported by an enthusiastic gallery of family, friends, and Hackensack members who came out to watch. All came away impressed by the quality of play and of the course.

“The moment I came here for a practice round, I felt comfortable on this course,” said Ervasti. “Cameron’s a great player and I gave him a good fight, but just didn’t make the putts when I needed to.”

Next up for Cameron Wilson is U.S. Amateur qualifying on Tuesday, August 11th at GlenArbor Golf Club in Bedford Hills, N.Y. But before that? “I think I’m going to rest tomorrow,” said the newest Met Amateur champion.