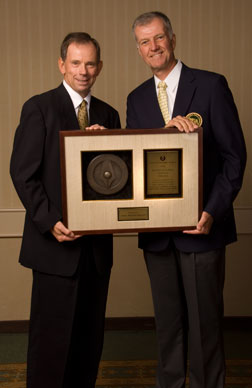 16 at the Hyatt Regency Greenwich, and one of the highlights of the evening was longtime MGA Tournament Director Gene Westmoreland receiving the Association’s Distinguished Service Award. MGA President Al Small was on hand to introduce Westmoreland before the assembled crowd of more than 600 attendees, which included a number of famous names from the world of golf.

In his acceptance speech, Westmoreland called himself “truly humbled” to be included on a list of DSA recipients including USGA Executive Director David Fay, golf architect Rees Jones, and Golf Hall of Famer Tom Watson.

During his 29-year tenure as tournament director, Westmoreland played a critical role in the MGA’s acquisition of the Ike Championship, which has become the Met Area’s premier amateur stroke play event. He also supervised the re-launch of the MGA/MetLife Public Links Championship and the debut of the Women’s Public Links, as well as the introduction of events such as the Senior Net Four-Ball, Father & Son Net Tournament, Women’s Net Team and Senior Open, which attract wider audiences to MGA tournament competition. He has also been instrumental in recruiting Rules of Golf experts who provide an important service at all championships. In 2007, he oversaw the creation of a new championship, the MGA Mid-Amateur, whose permanent trophy was named “The Westmoreland Cup” in his honor.

In his remarks, Westmoreland drew attention to the many people he has worked with throughout his career. “The success of the MGA tournament program could not have been realized without the tremendous dedication of the outstanding professional staff at Golf Central, and the more than 300 tournament volunteers who devote their time and energy to these great events.”

It was an outstanding night of awardees and presenters. Westmoreland’s award was followed by the presentation of the Mary Bea Porter Award to D.J. Gregory, a 32-year-old with cerebral palsy who inspired millions of people around the world by walking every hole of every PGA Tour event in 2008. Gregory was presented with his award by CBS Sports commentator Jim Nantz, who has known Gregory for 20 years and called him “my personal hero.”

Golf legend Arnold Palmer was on hand to present the Winnie Palmer Award to his longtime business manager and close friend Donald “Doc” Giffin, who has helped Palmer with his off-course charitable and business activities for 44 years. Palmer drew a standing ovation and praised the Metropolitan Golf Writers Association for creating the award 10 years ago to honor the memory of Palmer’s late wife.

Other notable appearances at the MGWA Awards dinner included: LPGA co-founder Louise Suggs, who was presented with the MGWA’s Gold Tee Award by MGWA President Ron Sirak; David Feherty of CBS Sports and Dave Anderson of the New York Times, who presented the Lincoln Werden Journalism Award to former Golf Magazine editor-in-chief George Peper; the Putman family of Mendham, N.J., who received the MGWA Family of the Year Award; and Rolex, which was honored with the Bing Crosby Tournament Sponsor of the Year Award. Receiving the MGWA Club of the Year award was Rockaway River Country Club in Denville, New Jersey.