LOCUST VALLEY, N.Y. (August 7, 2011) – In a closely fought match between two 19-year-old talents, Mike Miller of Knollwood made a rousing comeback to defeat Sam Bernstein of Century, 3 & 1, to win the 109th Met Amateur at the Piping Rock Club. Miller has now won two of the three oldest MGA championships—the 93rd Met Junior at Ardsley Country Club in 2010, and now the Met Amateur, the most historic of all MGA events.

The 36-hole match began at 7:30 a.m. amidst spotty rain showers that intensified during the fifth and sixth holes but finally stopped by the seventh hole, when a humid sunshine broke out that remained for the rest of the day and resulted in improved scoring conditions. At the midway break of the match, Bernstein held a 2-up lead on the strength of birdies on the 16th and 18th holes, and Miller knew he had to regroup. He made a call to his dad, Knollwood Country Club head professional Bobby Miller, for some advice.

“He told me to slow things down a bit, and it really helped to hear his encouragement,” said Miller, whose dad joined the sizeable gallery for the afternoon portion of the match 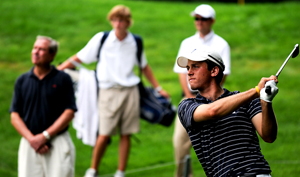 was a formidable opponent who showed no signs of giving up the lead. In fact, he extended it to 3-up on the 20th hole of the match by curling in an eight-foot birdie putt from below the hole. The players then halved the par-three third hole (21st hole of the match), and Bernstein looked poised to take a 4-up lead when Miller bogeyed the par-four fourth hole. But Bernstein, who had been solid on short putts all week, lipped out a three-footer to make a bogey of his own, settling for a halve and giving Miller a breath of life.

To say he took advantage of it would be an understatement. Miller went into another gear, starting things off by driving the green on the par-four fifth hole and charging in the eagle putt from 15 feet away to shave Bernstein’s lead to 2-up. He then won five out of the next six holes, adding another eagle at the par-five 10th hole (28th hole of the match) by hitting a 17-degree hybrid club to within four feet of the hole. In total, Miller played holes 5 through 13 (23rd through 31st in the match) in an astounding eight under par, going from 3-down to 4-up in what seemed like the blink of an eye.

“I’ve never had a stretch like that in a match, never,” said an ecstatic Miller. “The hole looked like a jar; everything went in.”

Though Bernstein made it interesting at the end, winning the 32nd and 34th holes to cut Miller’s lead to 2-up with two to play, Miller clinched the victory with a gorgeous 7-iron tee shot on the par-three 17th hole at Piping Rock that settled about 14 feet past the hole. After Bernstein’s birdie attempt slid by, Miller rolled in the putt for a birdie to win by a 3 & 1 margin and add his name to a silver trophy that includes many of the best players in amateur golf history, including former Knollwood member Willie Turnesa. Through the marriage of Miller's aunt Lynn, the Turnesa and Miller families have a shared family tree.

“Starting the day out in the rain, I knew this was going to be a grueling match,” said Miller. “To have the outcome go my way, and to see my name go next to all those other great players like Willie Turnesa, and Cameron Wilson, and George Zahringer, and Andrew Svoboda, who’s out on Tour now, means so much.”

All day long, Bernstein and Miller enjoyed a friendly rapport on the course. The two competitors have known each other for many years through junior tournaments and local events, and Bernstein showed himself a lot in defeat.

“Obviously you want to win, but I said at the beginning of the day that I just wanted to go out there and play well and if he was going to beat me, let him actually beat me rather than me give it to him. And that’s how it worked out,” said Bernstein. “I mean, 8-under through nine holes, it’s tough to even imagine that, so you just have to tip your hat to him. If you have to lose, it’s tough to lose to someone better than Mike.”

It was an outstanding week at Piping Rock, and the 6,846-yard, par-71 course once again proved to be the type of Met Amateur venue on which the best players rise to the top and win. In 2012, the MGA looks forward to bringing the 110th Met Amateur to Hollywood Golf Club in Deal, N.J.

For full coverage of the 109th Met Amateur, including photos from each day, visit www.mgagolf.org.

Midday update: Just like he did yesterday in his semifinal match against stroke play medalist Alex Edfort, Bernstein won the par-four first hole when his 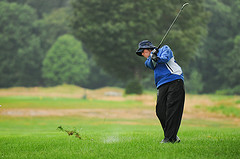 opponent bogeyed. Miller three-putted while Bernstein parred, but two holes later, Bernstein returned the favor and had a three-putt of his own to hand the hole to Miller, squaring the match.

The next turning point was on the fifth hole, when Miller hooked a drive that ricocheted back into the fairway, setting up an approach shot to six feet. But Bernstein would not give in easily, dropping a 40-foot par putt through the driving rain to force Miller to make his birdie attempt, which he did to take a 1-up lead. Two holes later, the match was squared again when Bernstein birdied from roughly 20 feet.

"I gave him a gift on #1 and then he gave it right back on #3, so that's how things were going early on," said Miller.

Bernstein concurred, and added his own analysis. "I felt like he stole one from me on the fifth hole, but then I came back on #7 and got that birdie putt to drop."

The match remained all square until the par-five 10th hole, when Bernstein three-putted to hand the momentum back to Miller, who took a 1-up lead. However, that lead only lasted one hole. On the par-three 11th, Bernstein laced a 4-iron to 8 feet and sunk the birdie to square the match. As play shifted to the hillier, tree-lined back nine, Bernstein was a bit sharper. He won the uphill 15th and 16th holes, the latter with a 10-foot birdie putt that gave him a 2-up lead for the first time. Miller then two-putted from the fringe on the par-three 17th while Bernstein failed to get up and down from greenside rough.

The players reached the 18th hole with Bernstein holding a 1-up lead. Bernstein hit his second shot to just in front of the greenside bunker, while Miller pushed his second well right onto the road. He received relief from the pavement and hit a quick-stopping wedge to 8 feet below the hole. However, he missed his par attempt while Bernstein curled in a six-foot birdie putt to regain the 2-up lead at the lunch break.