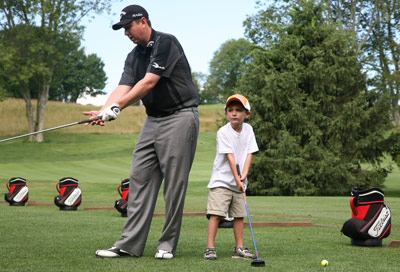 The event was co-hosted by Henry’s charitable foundation, The Henry House, which helps fund projects that benefit children in the community. Through the J.J. Henry Invitational, The Henry House will support the future construction of a new learning center at The First Tee facility at Fairchild Wheeler Golf Course in Bridgeport, Conn. The successful day included a junior clinic, golf outing, and evening reception.

The day began with a clinic given by Henry and local PGA professionals to more than 60 junior participants from The First Tee at Fairchild Wheeler. The junior golfers in attendance were invited to step up and show their own skills as Henry gave pointers on proper stance, grip, and alignment, and also hit some drives that drew applause from the enthusiastic youngsters. Autographs and questions filled the morning as Henry discussed his days growing up playing junior golf in the Met Area as well as his approach to PGA Tour events and how he prepares to compete against the best golfers in the world.

The day's events continued with an 18-hole shamble, ceremoniously started with Henry’s opening tee shot.  Each group was paired with a participant from The First Tee of Metropolitan New York, who served as the honorary team captain for their group. The day closed with dinner and a reception hosted by ESPN’s Chris Berman, which featured both a live and silent auction. Photos from the day can be found by clicking here.

For more information on The First Tee of Metropolitan New York, click here.