Balin Plays His Way into PGA with 63

Balin Plays His Way into PGA with 63 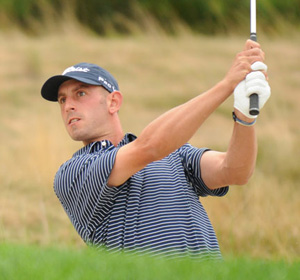 June 30, 2011 -- Burning Tree Country Club assistant professional Danny Balin (left) of Greenwich, Conn., shot a course-record 63 in the final round to jump 30 spots up the leaderboard and finish in a tie for fourth place at the PGA Professional National Championship at Hershey Resort in Hershey, Pa. The round allowed Balin, the 2010 Met Open runner-up, to easily place in the top 20 and earn a place in the 2011 PGA Championship, to be held August 11-14 at Atlanta Athletic Club in Duluth, Ga.

This will be the second consecutive PGA Championship appearance for the 29-year-old Balin. In 2010, Balin also finished tied for fourth at the PGA Professional National Championship, and played in the PGA Championship at Whistling Straits, where he missed the 36-hole cut. With that experience under his belt, Balin will be looking to improve on his showing when one of the strongest fields in golf comes to Atlanta for the final major championship of 2011.