EAST NORWALK, CONN. (May 10, 2011) – After becoming the first amateur to win the MGA Senior Open, John Ervasti of Sleepy Hollow completed the MGA “Senior Slam” with a win at the 84th MGA Senior Amateur Championship at Shorehaven Golf Club in East Norwalk, Conn. Ervasti followed his opening-round 73 with a four-over-par 75 to earn a three-stroke victory over two-time winner Shawn McLoughlin of Ridgewood (Conn.) and Bill Henry of Forsgate, who tied for second place.

Ervasti, 56, is now the only person in history to win both the MGA Senior Open and now the MGA Senior Amateur. Coincidentally, Ervasti’s runner-up finish at the 2009 Met Amateur came at the hands of Cameron Wilson, who plays out of Shorehaven. Ervasti acknowledged that hanging tough with one of the area’s top young stars helped propel him to two MGA victories in eight months. “It proved to me that I could do a little better than what I was doing in the past,” he said. That week at the Met Amateur jump-started Ervasti’s run of top MGA finishes. 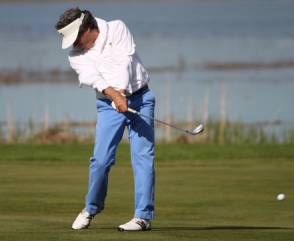 Playing conditions at Shorehaven were similar to yesterday’s first round, though the wind was gentler today. However, the greens remained firm and fast, and the field of 32 players who made the cut to the final round found that accuracy and distance control on approach shots was critical. Ervasti was one of five players in the field to shoot 75, which was the low round of the day.

Ervasti began today’s final round with a two-stroke lead over a trio of players, but with 21 fellow competitors within five shots of the lead at the start of play this morning, including past champions McLoughlin, Ned Steiner of Mountain Ridge, and Steve Rose of Fresh Meadow, Ervasti needed to turn in another consistent round to claim his second MGA title. After shaky drives on the first and third holes, he was able to right the ship and turn in a solid round, punctuated by a near-perfect tee-shot on the par-three 17th, which he took advantage of by dropping the putt for a birdie.

On the home hole, Ervasti found himself in a safe position off the tee. Hitting a low-trajectory long-iron that came to rest on the fringe on the front-right corner of the green, Ervasti’s lag putt of forty feet was nearly holed and he was able to safely tap in for the three-shot victory.

“Shorehaven is a great golf course and you have to drive the ball very accurately, which I struggled a little bit with today.” After those jitters dissipated, Ervasti found his swing once and went on to win his second career MGA title. “I hope this is the start of a new trend,” he said afterward.

Seven former champions of the MGA Senior Amateur made the cut and McLoughlin and Rose were the high finishers of that group. McLoughlin applied some pressure on Ervasti and was sitting at 7-over-par through 14 holes, but bogeys on 15 and 18 dropped him back to 9-over for the championship and out of contention for his third title. Henry suffered a similar fate after a birdie on 14 brought him to 6-over, but a double-bogey on 15 and a bogey on the final hole brought Henry to 9-over and tied in the clubhouse with McLoughlin. Peter Van Ingen of Deepdale, the 1981 Met Amateur champion, shot 75 to finish in fourth place at 10-over 152.

In the end, it was Ervasti’s consistency that earned him the title, but he did falter at times down the stretch. He got in trouble on the par-three 13th and made double bogey, and followed up a par on the 14th hole with a bogey on 15. Holding a two-shot lead, Ervasti nestled his tee shot on the par-three 17th to about four feet and sank the birdie putt, giving him three-shot cushion heading to the final hole.

The event featured a full field of 168 competitors, 32 of whom survived the cut of eight-over-par 79, and who battled a challenging course setup and windy conditions for the Senior Am trophy.

Shorehaven, founded in 1922, designed by Willie Park Jr., has hosted a number of prominent events in the past, including the 1992 Ike, 1959 Connecticut Open and 1960 and ’90 Connecticut Amateurs. This week’s competitors were extremely complimentary of the fast, yet incredibly smooth greens, course layout, and playability despite difficult conditions, particularly on day one of the event.

The MGA Senior Amateur Championship is one of the most prestigious events on the MGA calendar, and is open to players 55 and older. Next year, the championship will be held at Metedeconk National Golf Club in Jackson, N.J.