SPRINGFIELD, N.J. (August 3, 2011) – It’s been quite the summer for young Cameron Young of Scarborough, N.Y. Since school ended, the 14-year-old has won the Westchester Amateur, made the cut in the Ike Championship, qualified for the Met Open—which will be played at his home course, Sleepy Hollow Country Club—won the Westchester Boys championship yesterday, and today once again entered the winner’s circle. Young shot two consecutive rounds of 72 for a one-over-par 144 total, good for a two-stroke victory at the 9th Carter Cup, the MGA’s junior stroke play championship, conducted on the Upper and Lower courses at Baltusrol Golf Club in Springfield, N.J.

“It has definitely been my best summer yet,” Young said, attributing much of his success to both a growth spurt [6 inches in the last year] as well as the amount of practice and preparation he has put in. This included a putting lesson given to him the night before the Carter Cup by his dad, David Young, the head golf professional at Sleepy Hollow. 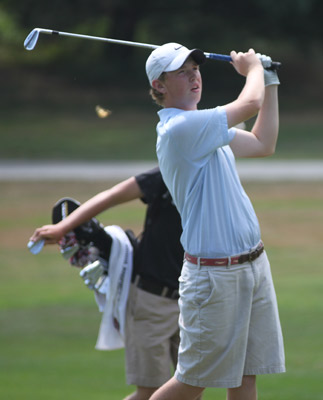 Young, seeing the two famed courses at Baltusrol for the first time, managed his game very well taking into account the fast, firm conditions the field of 37 teens 18 years of age and younger faced in the morning, followed by the periodic rain and wind that blew through in the afternoon. He started the day off with a double-bogey 6 at the 440-yard first hole of the Upper Course, but then had a birdie on the next hole and settled into a consistent rhythm, making only four bogeys the rest of the day to go along with two birdies and an eagle on the par-five first hole of the Lower Course.

Finishing alone in second place was Ethan Wall of Brielle, N.J. (146), while Ian Palfrey of Bronxville, N.Y., and Max Christiana of White Plains, N.Y., tied for third at four-over 147. Theo Humphrey of Greenwich, Conn., held the morning lead after firing a 2-under-par 69, but the wheels fell off for the young star, who won the 2010 Westchester Junior, as he struggled to a 79 in his afternoon round. Humphrey’s day was highlighted by an eagle on the par-4 16th hole on the Upper Course where he holed out from 143 yards with a pitching wedge.

At the end of the day, however, the accolades go to Young, who will join his dad in the Met Open field at the end of August. The incoming freshman at Fordham Prep started his second round hot as he eagled the par-five first hole of the Lower. “I hit a lot of solid shots out there today. I also made some putts, including a 40-footer on the second hole of the Upper Course.” The rest of his round was a story of consistency, which was the recipe for success in the damp conditions, as he made 15 pars and two bogeys en route to his first MGA title. Young now joins the ranks of other top junior players to win the prestigious junior stroke play event, including Cameron Wilson, Morgan Hoffmann, Chris DeForest and David Pastore.

The Carter Cup is an invitational event open to juniors who are 18 years or younger and who have not yet started college. It is named in honor of Michael P. Carter, an accomplished junior player and standout member of the Delbarton School golf team in Morristown, N.J., who died in a car accident in 2002. Carter was a junior club champion at both Baltusrol and Winged Foot Golf Clubs, and was a promising player on the golf team at Penn State University. The event is a collaborative effort between the Baltusrol Golf Club and the MGA. Michael’s father, who passed away in 2005, was a former club president of Baltusrol and was also vice president of the MGA.