DEAL, N.J. (August 5, 2012)– The final match of the 110th Met Amateur Championship held true to the form displayed by the outstanding field all week. At the end of today’s 36-hole final match, 20-year-old Ryan McCormick of Suburban emerged with his first career MGA victory following a back-and-forth battle with Met Area newcomer Matt Mattare of Bethpage, whom he defeated by a 3 & 2 margin. It is the biggest win so far in what has been the best season of McCormick’s young career, and he becomes the first person since Joseph McBride in 1949 to win the Met Amateur and the New Jersey State Amateur in the same year. 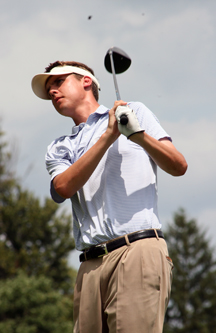 “I’m thrilled. It really doesn’t get much better than to win this event, which so many good players have won,” said McCormick. Among those winners is 2010 winner Evan Beirne, a former teammate of McCormick’s at St. John’s.

“I’ve actually been talking to Evan the last few days and he’s been helping me,” McCormick said. “So to win this, and especially to beat Mike [Miller] yesterday, and to beat Pat [Wilson, his St. John’s teammate] the first day, who was playing really well, makes me really pleased.”

Mattare, 26, had also been playing well all week, including a Met Amateur-tying record 64 in the second round of stroke play qualifying.

“I’m proud of how I showed here,” said a gracious Mattare, who recently moved to New York to work for Morgan Stanley and was playing in his first MGA championship. “Obviously I would have loved to have gotten the win, but you never want to give it away. You want someone to win it, and clearly that’s what Ryan did. He just played better.”

McCormick and Mattare put on an outstanding show during the morning 18, which began at 7:30 a.m., and the players took advantage of the smooth greens and calm conditions. Mattare won the first hole with a birdie and McCormick did the same at the second hole to square the match. Mattare and McCormick then halved the next two holes with birdies, meaning each player was 3 under par through 4 holes. While they cooled off a bit on the back nine, it was a tight battle the entire way and neither player led by any margin larger than 1-up.

The match was all square for most of the back nine until McCormick’s par on the 18th hole. After both players drove it in the fairway, McCormick hit a pitching wedge to 10 feet on the par-4 18th hole from 152 yards out, while Mattare pulled his approach shot into thick rough and was unable to get up and down.

“That was nice to have that momentum going into the afternoon,” said McCormick. “I kind of thought that while we were walking off the tee. I said ‘let’s make birdie here and try to take a lead.’” While he didn’t make birdie, he still got the lead thanks to Mattare’s bogey, and it was a lead he wouldn’t relinquish for the rest of the match.

After a lunch break, the players returned to the course at 12:15 to start the afternoon 18. McCormick extended his lead quickly, winning the 19th hole after Mattare drove his ball within the margin of a hazard on the right side of the fairway. He then won the 21st hole to go 3-up, and then nearly made an eagle putt on the par-five 7th hole that gave him a 4-up cushion. Not that he thought the match was over by any stretch.

“Matt had been playing so well, and I knew even at 4-up that there was a long way to go,” said McCormick. 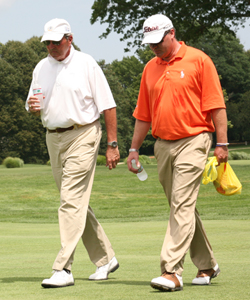 Indeed, Mattare went on a nice run to chip away at McCormick’s lead. He won the 27th, 28th, and 30th holes, two of them with birdies, to pull to within 1-down as the players reached the dogleg left, par-4 13th hole, the 31st hole of the match. It proved to be a turning point, as McCormick hit a wedge to within 8 feet and sunk the putt for birdie to win the hole.

“That putt on 13 was the best thing I did all day,” said McCormick. “That was huge to go back to a 2-up lead after he had gotten so close.”

While the birdie on 13 was big for McCormick, equally impressive was a 30-yard bunker shot he hit on the par-3 15th hole (33rd hole of the match) to within an inch of the cup. Mattare was safely on the green, and McCormick was faced with a difficult task to make his up and down.

“It was probably about 30 yards, and I just took a 54-degree wedge,” said McCormick. “The funny thing is, I’ve been trying to teach my dad [Suburban Golf Club head pro Mark McCormick] how to play better out of bunkers, and he’s seen me hit some pretty good bunker shots this week.”

Even his opponent was impressed. “That bunker shot on 15,” said Mattare, “was the kind of shot that wins championships.”

McCormick closed it out on the next hole, the beautiful uphill par-four 16th hole, with a two-putt par and a win that will resonate throughout the Met Area for years to come.