ELMSFORD, N.Y. (June 10, 2012) - One dream week ended and another began for the McCormick family on Sunday, June 10. Once the wheels of their West Coast bound airplane go up, they'll be departing a seven-day stretch filled with a lifetime's worth of memories and achievements. Next stop: San Francisco, California and The Olympic Club for the playing of the 112th U.S. Open. A major championship that will be littered with McCormicks for the first time. A chance to create more everlasting memories. 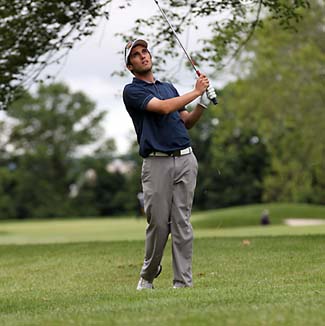 It was just last Monday, June 4, where Ryan, 20, and his father, Mark where making national headlines at Canoe Brook Country Club for being the only father/son duo to compete together, er, against each other, at U.S. Open Sectional Qualifying. Mark, the 49-year-old head pro at Suburban Country Club, followed up all the attention with stunning play to be one of four players to punch a ticket to the Open. Ryan, who was fresh off a thrilling playoff victory over reigning MGA Player of the Year Mike Miller at the New York City Amateur, failed to qualify. But his performance was the last thing on his mind.

"I was just so ecstatic for my dad," he said. "It was just so awesome, just coming off that high, I really didn’t sleep much. My dad didn't either."

The following morning, Ryan, a rising junior on the St. John's University golf team, had a practice round at storied Baltusrol for the upcoming NJSGA Amateur Championship, which was to be played on June 6-8 on both the Lower and Upper Courses. And instead of dwelling on his play at sectionals, Ryan did what no other New Jersey amateur in 41 years has ever done; shoot four under-par rounds. His 12-under total (68-71-67-70) was the lowest score since it became a stroke play event in 1971.

"I was so tired and so relaxed, I played really solid, just ho-humming around the course, fairways and greens," he said. "I’ve been playing some of the best golf I ever have this spring. And over at Baltusrol, I love that place, I’ve played three Carter Cups there and always played well. I’m really familiar with that place now. I don’t want it to sound wrong, but it was honestly really easy for me to walk around there."

So just four days after his father's triumph, Ryan added another trophy to his own mantle. And to top it off, he received an invitation after his victory to play in the prestigious Northeast Amateur Championship in Rhode Island at the end of June.

But before he can think about about that, he'll be at one of the most prominent golf tournaments in the world to cheer on his dad. Ryan said he'll caddy for Mark in his first practice round on Monday, then serve as his player instructor —which allows him inside-the-ropes-access—the rest of the week. Mark Cannizzaro of the NY Post, who is a good friend of the McCormicks, even set up a practice round with Phil Mickelson (one of Mark's favorite players) on Tuesday. So yeah, you can say things are going pretty well for the Morristown, N.J., natives.

"I feel like I’m in fantasy land here," Ryan said. "I won the Amateur, I’m going to Olympic with my dad, and now I’m gonna be playing in the Northeast Am, which I thought I had no chance of getting into a month ago. It's all just so awesome."

Ryan will also be competing in the 57th Ike Championship at Atlantic Golf Club on June 25 & 26. He's paired in the first-round with 2011 winner Tommy McDonagh.